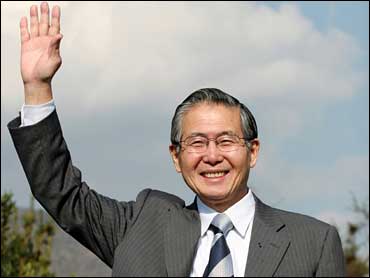 Chile's Supreme Court on Friday ordered the extradition of former Peruvian President Alberto Fujimori to face trial at home for corruption and human rights violations, including accusations that he ordered the death squad killings of 25 people.

The ruling is final and cannot be appealed.

Justice Alberto Chaigneau said agreeing on extradition "was much easier than expected" for the court's criminal panel, which approved the extradition on two human rights charges and five corruption charges stemming from Fujimori's 1990-2000 rule.

"In all, the extradition has been approved for seven of the 13 charges" filed by the Peruvian government in its extradition request, Chaigneau said.

Fujimori has repeatedly denied the charges, calling them politically motivated.

Chile plans to extradite the 69-year-old former ruler to Peru as soon as possible.

It's not likely, however, that Fujimori will be sent to Peru immediately. A prison facility must be prepared for him first, and that may take months. According to their extradition treaty, Chile now has three months to send him back.

When Fujimori's former spy chief, Vladimiro Montesinos, was grabbed in Venezuela in June 2001, he was sent back within days and jailed in a high-security naval prison along with Abimael Guzman and other top leaders of the Shining Path rebel movement.

But as a political figure and a former head of state, Fujimori will apparently be held in a special facility inside a regular prison pending his trial, which could easily last more than a year. Montesinos has been on trial for six years on multiple charges.

A court official was traveling Friday to Fujimori's condominium just north of Santiago, where he remains under house arrest, to inform him of the decision.

Chile's top court reversed an earlier ruling by a judge who said Peru had not presented enough evidence to back the charges.

The human rights cases include the 1993 death-squad killing of nine students and one professor at La Cantuta University, and the 1991 killings of 15 people at Barrios Altos, a working-class neighborhood of Lima.

Chaigneau said the corruption charges accepted by the court included alleged payoffs to members of congress to support government projects and illegal tapping of telephone calls.

Fujimori arrived in Chile in November 2005 in a surprise ending to his five-year exile in Japan, where he had fled as his decade-old government collapsed amid a corruption scandal. The Peruvian government quickly requested his extradition.

The former president, who holds both Peruvian and Japanese nationalities, also ran unsuccessfully for the Japanese Senate.