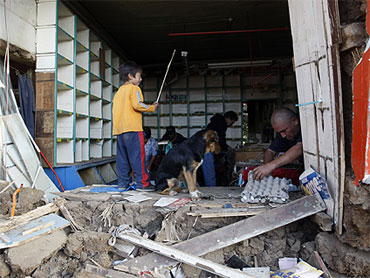 One man swings a thick metal chain. Another grips an ax. An older gentleman favors a wooden pole. And a 20-year-old spoiling for a fight has prepared a garrote - a menacing wire tied between two handles - to confront any intruders.

These and hundreds of other survivors of Chile's devastating earthquake have organized neighborhood watch groups, arming themselves and barricading streets to protect their damaged homes from looters. The groups have stepped in as police were overwhelmed by looting and soldiers were slow to restore order after an earthquake and tsunami.

"We take care of ourselves here," said 51-year-old Maria Cortes. She stood watch in Poblacion Libertad - "Freedom Community" - a gritty collection of small duplexes along an industrial road in the port town of Talcahuano. About 2,000 people live here around a common area three football fields long.

Most of Talcahuano was destroyed by Saturday's magnitude-8.8 quake and tsunami, which ravaged a 435-mile stretch of Chile's Pacific coast. Downed bridges and damaged or debris-strewn highways made transit difficult if not impossible in many areas. The official death toll reached 799 on Wednesday.

A pair of aftershocks only six seconds apart provoked a brief panic Tuesday in Concepcion and costal areas to the north, but no tsunami warning was issued and no new injuries or damage have been reported.

Some residents of Concepcion started running for high ground when an aftershock to Saturday's destructive earthquake was followed just six seconds later by another. The U.S. Geological Survey says Wednesday's temblors had preliminary magnitudes of 5.9 and 6.0, respectively. The 6.0 jolt was the strongest measured since Sunday.

Fire officials used loudspeakers to assure residents that no tsunami was imminent. A new tsunami warning was also erroneously reported by CNN.

The U.S. Embassy in Chile says it is working to locate between 700 and 1,200 American citizens believed to be in the quake zone.

Embassy press attaché Paul Watzlavick says the embassy activated its phone warden network, which is based on a registry of U.S. citizens in Chile. Thirty Americans have been located so far in the quake area, and there is no word of deaths of injuries.

The disaster has dealt the economy a severe blow - with the tsunami wiping out Talcahuano's port and the $40 million in business that courses through the local economy from the annual anchovy and sardine catch.

But Poblacion Libertad largely escaped damage. Here, residents talk about the "human earthquake" - a growing desperation of people without power, water, cooking gas and food. Many of its residents join the looting, taking food, drinks and anything else they can use from ruined stores - but return home fearful that others will do the same to them.

Others say they're forced by need to leave their damaged homes for food and water, only to find what little they have left has been stolen.

And so they have organized.

The men got planks of wood from a nearby lumber yard and nailed them to block entryways to the clusters of homes. They erected a barrier along an access road. The crime watch runs 24 hours.

"Each one organizes and protects his own entrance," said Cecilia San Hueza, 28. "We whistle to advise if there is anything suspicious."

So far, Poblacion Libertad has had only false alarms. Someone blew a whistle in the middle of the night, prompting hundreds of residents to run into the common. Nearby soldiers enforcing a 6 p.m.-to-noon curfew fired shots in the air to make everyone go back inside.

Elizabeth Ocampo, a 21-year-old resident of Poblacion Libertad, said firefighters arrived late this week to fight a blaze in the complex because they were busy combating looting and arson elsewhere. Five units burned to the ground.

Throughout the quake zone, survivors live in fear and feed on rumors of roving mobs. Gunfire has punctuated the night in Concepcion, Lota and other towns.

The eruption of banditry shocked the nation and put President Michelle Bachelet on the defensive. Chile's much-praised urban rescue teams were hampered by slow-to-arrive equipment - and the looting of their local base in Concepcion.

Almost everywhere, citizens have banded together to eat, get water and protect damaged or destroyed homes while they wait for the military to restore order and deliver aid.

In Hualpen, a poor community on the outskirts of Concepcion, Sonia Garrido and her neighbors felled trees across a street to protect their neighborhood. Volunteer guards sit around bonfires at night. Collectively, neighbors make bread and share it. Some draw brackish, smelly water from a lagoon and grumble about the lack of government aid.

"We're bad off," said Garrido, 46. "No water, no electricity. They care nothing about us."

Garrido's son armed himself with a garrote and joined a local crime watch whose other members wielded knives and pistols. But it didn't make Garrido feel much safer. She worries they'll kill someone.

She also worries that criminals will get in anyway, simply by wearing twisted plastic bags that patrol members use as armbands to identify themselves.

"I'm destroyed," Garrido said. "Last night I heard gunfire all around me. They're looting things and walking around with rifles doing anything they want. Nowhere is safe."

Like her neighbors, she must make the stressful decision each day of briefly abandoning her home so she can fill a wheelbarrow with water from a system that in normal times irrigates a traffic circle.

Under a state of emergency declared by Bachelet on Sunday, about 14,000 troops were sent into the quake zone. They can shoot to kill if necessary. The military says that hasn't happened.

A homeowner shot and killed a young man entering his house in the town of Chiguayante, El Mercurio newspaper reported.

In Concepcion, an unknown number of looters set fire to the El Polar department store Tuesday and were caught inside by the flames. Their bodies have yet to be recovered.