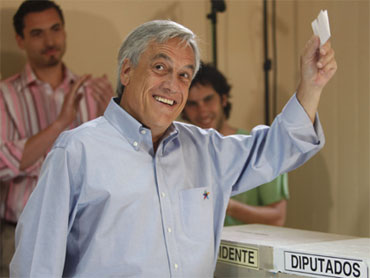 Chile's earthquake and tsunami smashed this pretty little tourist town into splinters, leaving little more than immense piles of wreckage and an awful stench. Rooting through the remains Thursday, Dichato's residents said they are pinning their hopes for renewal on the new president, a conservative billionaire who takes office next week.

Meanwhile, Reuters reported Thursday that the Chilean government had dropped its official death toll in the quake from more than 800 to just 279 - apparently because a large number of people who were only missing had been considered dead. However, the Reuters report could not immediately be confirmed.

Nothing short of mammoth reconstruction can return Dichato to a semblance of what it was, and survivors here — and throughout the disaster zone — said they're hoping President-elect Sebastian Pinera is up to the job.

"Chile is a country on the rise, economically strong, with many businesses. And because of this we expected more" of President Michelle Bachelet's leftist administration, said Amanda Ruiz, a secretary in a construction firm. "We're disillusioned."

"I think he has the ability to do it," said Luis Omar Cid Jara, 66, whose bakery and roast chicken shop on Dichato's main street were destroyed.

Pinera, who takes office March 11, stepped up his criticism of the outgoing president. He called Thursday for a sweeping modernization of Chile's disaster system to eliminate what he called "the lack of coordination and the weaknesses that this tragedy has uncovered with brutal eloquence."

Pinera named new governors for the six hardest-hit regions and told them to get to work even before his inauguration.

His immediate priorities: Find the missing; ensure law and order; restore utilities; and tend to the injured. Pinera said his administration will work more closely with the military on disasters than Bachelet, and he pledged to rebuild "with the most modern and efficient standards."

Bachelet, whose approval ratings were sky-high before the quake, bristled at the criticism and insisted "Chile will rise" from the devastation.

Touring an aid distribution center in the heavily damaged city of Concepcion, Bachelet denied any delays or indecision in the hours following Saturday's pre-dawn quake. Top military officers had complained they couldn't deploy troops to quash looting or deliver aid until Bachelet finally declared a state of emergency more than 24 hours after the temblor.

In the coastal town of Constitucion, firefighters were looking for bodies of people swept away by the tsunami as they camped on Isla Orrego, an island in the mouth of the Maure River that flows through the city. Constitucion suffered perhaps the greatest loss of life in the disaster, in part because many people had come for carnival celebrations and were caught in huge waves that reached the central plaza.

"There were about 200 people in tents who disappeared" on Isla Orrego, Fire Chief Miguel Reyes told The Associated Press.

An Associated Press Television News crew witnessed several bodies being recovered, including that of a baby girl washed up on the beach.

Rescue and recovery were in full swing in Dichato, where firefighters used long poles to probe for bodies in huge piles of muddy sand and beach wreckage. The navy ferried troops ashore to help unload 86 tons of food.

Volunteers canvassed camps up in the hills created by people who abandoned their ruined property in town, fearing another tsunami because of frequent aftershocks. They handed out carloads of clothing and food.

The magnitude-8.8 quake — one of the strongest on record — and the tsunami that followed ravaged a 700-kilometer (435-mile) stretch of Chile's Pacific coast and killed at least 802 people. Authorities have not said how many are missing but do say 2 million people were affected.

Bachelet said it could take at least three years to bring the region back.

The army was flying in 320 tons of aid, and the navy was shipping 270 more tons to coastal towns cut off from the rest of Chile.

Dichato is nestled between pine-forested hills and a lovely sheltered bay where colorful fishing boats served coastal communities and export companies. Its residents proudly note their beach is the only one in the region where children could swim safely in the ocean. Its population of 4,000 triples each January and February with tourists — many were in town when disaster struck — and residents count on that brief summer vacation for much of their income.

The quake and tsunami killed at least 19 people in Dichato and smashed neat wooden houses and small hotels into huge splinter piles. The surge ruined most other buildings in town, which stank Thursday with decomposing fish. One fishing boat marooned far inland was full of rotting octopus.

The Bachelet government had made a difference in Dichato, building 130 neat mustard-yellow duplexes in a public housing project that just opened in September and providing 60 million pesos — $120,000 — to restore the facades of businesses along main street, said Mabel Gomez, president of the local chamber of commerce.

Gomez, 29, ran several small businesses, providing public baths on the beach, an Internet and phone center, and several small cabanas to tourists. But Dichato doesn't have a bank, and like many business owners, Gomez lost the entire season's profits — 6 million pesos, about $12,000 — she had planned to deposit later this month.

"Just like the government has helped other countries, now it has to help us here," said Cid, the bakery and chicken shop owner. Booming profits from the state-owned Codelco mining company — which Bachelet zealously husbanded even as she spent more on social programs than any previous president — will have to be spent by Pinera on reconstruction, Cid said.

U.N. Secretary-General Ban Ki-Moon planned to meet both Bachelet and Pinera on Friday and tour Concepcion.

Pinera now plans an austere inaugural, with only brief stays by foreign dignitaries to enable police to focus on quake duty, and will fly to the disaster zone immediately after he is sworn in. Bachelet has canceled a farewell dinner planned for the eve of the inaugural.