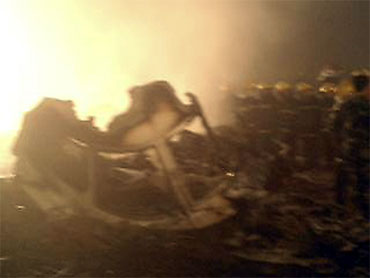 A Chinese passenger jet overshot a runway in the country's northeast and burst into flames Tuesday, but state television said 49 of the 91 people onboard had been rescued. The fate of the remaining passengers was unclear.

China Central Television quoted Sun Bangnan, deputy director of the Heilonjiang Public Security Department, as saying that 49 people had been rescued and that the fire had been put out.

Wang Xuemei, vice mayor of Yichun, told CCTV that three of the 49 hospitalized were in critical condition but gave no specifics.

The plane had taken off from Heilongjiang's capital of Harbin shortly before 9 p.m. (9 a.m. EDT.) and crashed during landing at the Lindu airport a little more than an hour later.

An official surnamed Qi at the Yichun No. 1 People's Hospital said 30 people had been brought there for treatment, with most suffering broken bones.

A man who would only give his surname, Wang, at the Yichun Rehabilitation Hospital, which has burn specialists on site, said 10 survivors were transferred there with burn injuries.

Another eight survivors were at the Yichun Forestry Hospital, said a duty officer surnamed Zhou. He said he did not know the nature of their injuries.

Henan Airlines is based in the central Chinese province of the same name and flies smaller regional jets, mainly on routes in north and northeast China. Previously known as Kunpeng Airlines, the carrier was relaunched as Henan Airlines earlier this year.

Henan Airlines and many other regional Chinese airlines flying shorter routes have struggled in the past few years, losing passengers to high-speed railroad lines that China has aggressively expanded.

Full-tilt expansion of Chinese air traffic in the 1990s led to a series of crashes that gave China the reputation of being unsafe. The poor record prompted the government to improve safety drastically, from airlines to new air traffic management systems at airports.

The last major passenger jet crash in China was in November 2004, when an China Eastern airplane plunged into a lake in northern China shortly, killing all 53 on board and two on the ground.