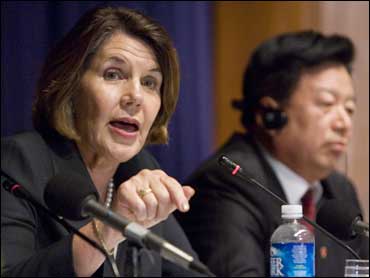 China signed an agreement Tuesday to prohibit the use of lead paint on toys exported to the United States.

Unveiled at the second joint U.S-China summit on consumer product safety, the pact was negotiated in the wake of the recalls of millions of playthings decorated with paint containing the toxic metal.

China has faced stiff pressure this year after an array of its exports, including toys, pet food ingredients, fish and jewelry, have been recalled over health and safety concerns.

"It cannot be denied that through our investigation we find that there are indeed some quality problems in individual products," said Chuanzhong Wei, vice minister of China's General Administration of Quality Supervision, Inspection and Quarantine.

In the pact, Beijing also pledged to step up inspections of its exports and take other steps to ensure that those products meet U.S. standards, said Nancy Nord, acting head of the U.S. Consumer Product Safety Commission. That will include joint efforts by the two countries to increase understanding of those standards among manufacturers and exporters.

The absence of such an understanding allowed paint suppliers to provide lead paint to companies making toys sold by Mattel Inc. and other companies, said Wei. Lead paint has been banned on toys made in the United States since 1978.

"That's why we decided we should intensify the exchanges between importers and exporters in the field of standards," Wei said, speaking through a translator.

The United States and China also agreed to cooperate on improving the overall safety of the latter country's toy exports, as well as fireworks, cigarette lighters and electrical products.

"This is an important signal from the Chinese government that it is serious about working with CPSC to keep dangerous products out of American homes," Nord said.

But Wei stressed that most Chinese exports are safe, echoing a line that Beijing repeatedly has used in defending the quality of its products. While acknowledging more could be done, Wei said that 100 percent safety was impossible and warned against overemphasizing what he characterized as limited problems.

"We should not over-propagandize the problem," Wei said.