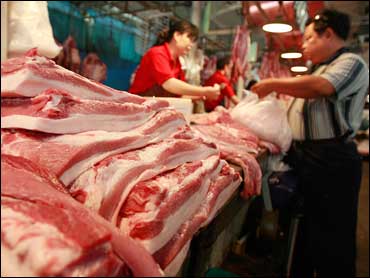 China on Thursday rejected a U.S. newspaper report that said Beijing was bullying less-developed countries that complain about the quality of its exports.

The Chinese government suggested last month that Indonesia lower its safety standards and refused to cooperate after Jakarta ordered tests that found chemical contamination in a variety of products imported from China, The Washington Post said.

The Philippines and Malaysia have also been subject to similar treatment and other tit-for-tat measures, the Post said.

But Foreign Ministry spokeswoman Jiang Yu dismissed the report as "groundless and not in line with facts."

She said an Indonesian delegation was in China to discuss food safety.

"The imports and export products of China must be line with China's regulations, laws and standards, and also in line with the standards and requests of the importing countries," Jiang said at a regular briefing.

Chinese exports from toothpaste to seafood have been the target of bans and recalls around the world because they contained toxins and chemicals.

The Post said that Indonesia started testing their Chinese-made imports to see if they had problems and found cosmetics tainted with mercury and potentially cancer-causing candy.

At a meeting in August called by Chinese officials who said they had a possible solution, the newspaper reported that Husniah Rubiana Thamrin Akib, Indonesia's head of top food and drug safety, was told to consider lowering the country's standards instead.

Husniah was quoted as saying that she was "very upset and very surprised."

In July, Philippine authorities warned that the White Rabbit brand milk candy - a confection beloved in China - had tested positive for formaldehyde, a preservative and an embalming fluid that has been linked to cancer in humans, and ordered it removed from stores.

About two weeks later, Chinese state media also said quarantine officials had seized two tons of dried banana chips imported from the Philippines because they contained levels of the preservative sulfur dioxide that were 25 times the maximum allowed by state regulations.

China also said that yoghurt from Malaysia did not meet labeling requirements after the country banned Chinese nuts and dried fruit because they contained fungus and potentially cancer-causing sweeteners, the Post said.

Beijing has been both critical and conciliatory in its response to international criticism of the safety of its products.

It has blamed foreign media for negative press and highlighted its own import problems to show that other countries have the same issues.

But the state has also launched a sweeping effort to improve quality by cracking down on illegal producers, setting up a special, high-level panel and passing new regulations.

Hu said Thursday that Beijing is "willing and ready" to work with the international community to improve product safety.

"The Chinese government has always taken the quality of Chinese products and the safety of Chinese food very seriously," Hu told a joint news conference with Australia's Prime Minister John Howard at an Asia-Pacific economic summit in Sydney.

But problems have existed for years in China, with baby deaths linked to fake milk powder and the use of the banned cancer-causing industrial dye, Sudan Red, to color egg yolks.

Also Thursday, Chinese authorities said they were cracking down on illegal distilleries and fake alcohol producers.

Some 208 small, unlicensed alcohol producers have been shut down in the past week in Quzhou, a city in Zhejiang province in eastern China, the General Administration of Quality Supervision, Inspection and Quarantine said.

Inspectors were also conducting checks in Shangrao in Jiangxi province, Huangshan in Anhui and Nanping in Fujian, the agency said in a statement on its Web site.

Quality control officials on Wednesday checked 144 distilleries in the four cities and more than 100 unlicensed producers were punished, the agency said without giving details.