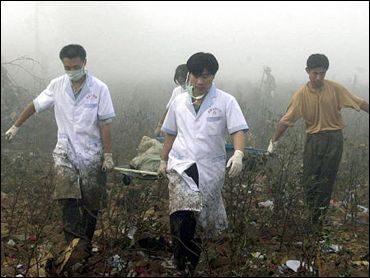 A blast ripped through a fireworks factory in northern China, killing 29 people and injuring at least 141, state media said Tuesday.

The explosion took place Monday at the Guoxi fireworks factory in the town of Wangkou in Hebei province, China Central Television reported.

It wasn't immediately clear how many workers were in the factory at the time.

"I thought it was an earthquake. I was really scared. My sister and I just ran out of the house," Qian Yun, a 19-year-old living about three miles away from the factory, said by telephone.

Another villager, Zhang Fangjie, was working on his farm at the time of the blast.

"I heard three or four explosions in a row and saw black smoke rising in the distance," the 40-year-old Zhang said.

The injured were hospitalized and 50 people with minor injuries were released, CCTV said.

The blast completely destroyed the main workroom at the factory and buildings up to 330 feet away were damaged, the Xinhua News Agency said. It said the cause was under investigation.

Fireworks-making in China is what might be called a Mom-and-Pop industry, reports Gibson: It's unregulated, dangerous, and hundreds die each year in horrendous accidents.

After a 2001 explosion that destroyed a schoolhouse in southern China where parents claimed children had been forced to make firecrackers, then-Premier Zhu Rongji issued an unprecedented apology on national television for failing to protect public safety.

Photos on Chinese news Web sites showed the brick building reduced to piles of rubble and the charred skeletons of a motorcycle and minibus. Portions of shattered walls were left standing. Rescue workers were also shown pulling injured people out of the wreckage and carrying a person away on a stretcher.

Xinhua said on its Web site that local authorities approved the factory for fireworks production in December 2000.