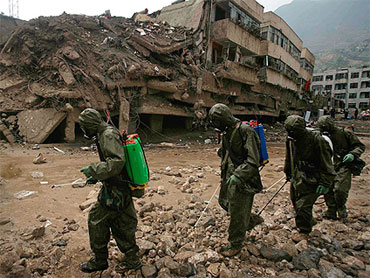 Heavy rains lashed a remote section of northwestern China as the death toll from weekend flooding that triggered massive landslides jumped to 1,117, although the fading hopes of rescuers got a boost late Wednesday when a survivor was found in the debris.

The state-run Xinhua News Agency gave no immediate details on the survivor, found nearly four days after the disaster struck. Earlier Wednesday, a 50-year-old man was rescued who had been trapped in knee-deep mud on the second floor of a hotel, Xinhua said.

Local officials were cited as saying at least 627 people were still missing.

The National Meteorological Center warned there was a "relatively large" chance of more landslides in the coming days, as heavier rain was expected, with up to 3 1/2 inches (90 millimeters) forecast for Friday.

Troops and rescue teams, joined by traumatized survivors, were increasingly turning to recovering bodies and seeing to the needs of the living. Clean drinking water was a primary concern, with most local sources destroyed or too polluted to use.

Entire communities in Gansu province's Zhouqu district were swallowed when the debris-choked Bailong River jumped its banks early Sunday, releasing wave after wave of mud and rubble-strewn water. While torrential rains were the direct cause, tree cutting that left the dry hills exposed and the weakening of cliff faces by a massive 2008 earthquake were seen as contributing factors.

Buildings were torn from their foundations, their lower floors blown out by the force of the debris-laden water. Three villages comprising hundreds of households were entirely buried and much of the county seat was submerged.

"In some households, all the people have died," making the counting of the dead more difficult, Zhang Weixing, a Ministry of Civil Affairs official, told a news conference Wednesday.

Crews using explosives and excavators rushed to drain an unstable lake on the Bailong upriver of Zhouqu, fearing more rain could cause a massive breach, bringing more misery to the town.

"The danger of the barrier lake collapsing has been basically eliminated," Jiao Yong, deputy vice minister of the Ministry of Water Resources, told the news conference.

Disinfectant crews in protective suits sprayed chemicals across the ground and over machinery, the smell of death heavy in the air. State media reported numerous cases of dysentery, while infected injuries, a lack of sanitation, clean drinking water and accumulating garbage increased the risk of typhoid, cholera and other diseases.

But the deputy director of the Health Ministry's emergency office, Zhang Guoxin, said there have been no reports of an epidemic outbreak.

Rescue crews have been largely reliant on hand tools, with heavy equipment either unable to traverse the difficult terrain or mired in mud up to several yards (meters) deep.

Rescuers digging by hand through mud found a 52-year-old man who had been trapped for more than 50 hours inside a leveled apartment building in Zhouqu. Rescuers with sniffer dogs discovered the man, Liu Ma Shindan, who was weak but breathing normally.

At least 45,000 people have evacuated their homes, and the Ministry of Civil Affairs reported the delivery of 30,000 tents to the area, with thousands more on the way. Zhouqu has a population of 134,000, but it wasn't clear how many needed emergency shelter.

Shen Si, a member of the Tibetan ethnic group native to the area, watched forlornly as troops dug to reach the bodies of her relatives inside their buried home.

"My mother and father in their 60s and my younger brother, all three of them, are buried here in our house still," she said.

Throughout the area, bodies were seen wrapped in blankets and tied to sticks or placed on planks and left on the shattered streets for pickup.

"It is now a critical time ... we must give the highest prominence to the protection of people's lives and properties," it said in a statement.

Flooding in China has killed more than 2,000 people this year and caused tens of billions of dollars in damage across 28 provinces and regions.