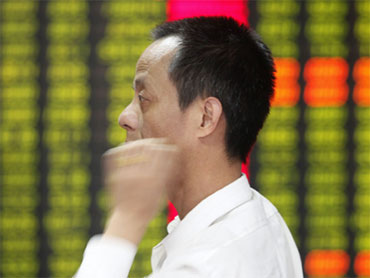 Asian markets headed lower Monday, with Chinese shares leading the plunge by shedding a massive 6.7 percent and Japanese stocks edging down after the country's opposition party came to power in a landslide victory.

Investors began selling heavily last week on concerns that banks will cut back on the lavish lending that had helped push shares up more than 80 percent by early August.

Further discouraging buying sentiment, last week the government said it will try to curb overcapacity and excessive investment in industries including steel and cement - a possible side effect of its massive stimulus plan.

Economists say such measures are merely aimed at fine-tuning and balancing growth that has been driven largely by government-backed stimulus spending. But they did not sit well with China's hypersensitive investors.

"Investors were a bit over-positive a month ago, and now they've turned a bit overly pessimistic," said Peng Yunliang, an analyst at Shanghai Securities in Shanghai.

In Japan, investors tread cautiously after the Democratic Party of Japan swept to power in national elections over the weekend amid frustrations with the ruling party as the world's second-economy emerges from its worst downturn in decades.

Crude oil prices dropped in Asia, with the benchmark contract for October delivery lower by 44 cents at $72.30 a barrel. The contract rose 25 cents on Friday.