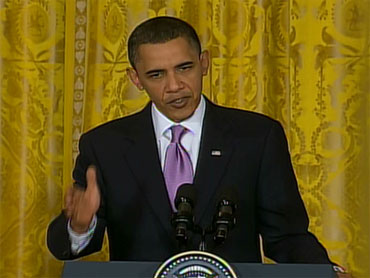 Speaking at the U.N., Secretary of State Hillary Rodham Clinton said the officials had "accurately described" the position of the five permanent members of the U.N. Security Council and Germany. She did not elaborate but said the group, known as the "P5-plus-one," was unified.

"There will be a great deal of further consultation, not only among the P5-plus-one but other members of the Security Council and other member nations during the next weeks," she told reporters.

China's change of position improves prospects for passing a resolution aimed at pressuring Iran to scale back its nuclear ambitions, which Tehran insists are limited to developing nuclear power for peaceful purposes.

President Barack Obama had said Tuesday he hoped to have Iran sanctions in place within weeks - a timetable that appeared highly ambitious given China's previous reluctance to even discuss specific sanctions. China had insisted that negotiation with Iran needed to be pursued.

On Wednesday, however, two U.S. officials said that in a phone call among officials from the U.S., Russia, China, Britain, France and Germany, the Chinese representative said his country was prepared to discuss specific potential sanctions.

The officials spoke on condition of anonymity because the diplomatic talks are ongoing.

One of the officials said China had made a "commitment" to discuss the specifics of a Security Council resolution, and that on that basis the U.S. would press ahead with an effort to pass such a measure. The officials cautioned that this does not mean there is yet a full consensus on U.N. sanctions.

The Obama administration is hoping to get a U.N. resolution by the end of April. Clinton has not publicly cited a specific timetable but in recent days has sounded more optimistic about the chances of getting China to agree that new penalties are needed to force Iran's hand.

"We happen to think that action in the Security Council is part of negotiation and diplomacy that can perhaps get the attention of the Iranian leadership," she said.

French President Nicolas Sarkozy, speaking to reporters after meeting with Obama at the White House on Tuesday, said Washington and Paris were "inseparable" in their thinking on the subject of Iran sanctions.