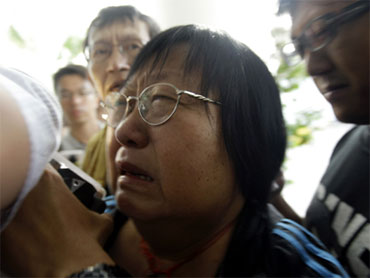 China demanded answers Tuesday from the Philippines after a 12-hour hostage drama in the heart of Manila ended with eight Hong Kong tourists dead along with their Filipino hostage-taker after a day of botched negotiations.

Dismissed policeman Rolando Mendoza, 55, was armed with a M16 rifle and a pistol when he seized the busload of 21 Hong Kong tourists and four locals to demand his reinstatement on the force. The ordeal ended in bloodshed on live TV with police storming the bus and killing the gunman after he fired at the tourists, killing eight of them.

"The Chinese government demands the Philippine government launch a thorough investigation into the incident and inform the Chinese side of related details as soon as possible," Yang said, according to a statement posted on his ministry's website.

At the Philippine Consulate in Hong Kong, a wealthy former British colony unaccustomed to violence, several dozen protesters chanted: "Strongly condemn the Philippine government for being careless about human life!"

Philippine police defended their action but promised to review all events leading to the deaths. "There will be an internal audit. We will look at whether what we did was right," national police spokesman Agrimero Cruz told The Associated Press.

"Of course what happened was far from ideal. Nevertheless, we are congratulating our personnel because despite the lack of equipment ... they risked life and limb," he said.

President Benigno Aquino III, faced with his first major crisis since taking office in June, said the incident showed the need for more police training and better equipment. "How can I be satisfied when there were people who died?" Aquino told reporters late Monday.

Some police commandos lacked helmets and appropriate communication equipment, and the team had no ladder vehicle to help climb aboard the seized bus while storming it - shortcomings that hampered a speedy response.

According to newspaper reports, Mendoza was among five officers who had been charged with robbery, extortion and grave threats after a Manila hotel chef filed a complaint alleging they falsely accused him of using drugs to extort money. Mendoza was fired last year but claimed he was innocent.

As negotiations got under way in Manila's downtown where the bus was parked, the outcome at first looked promising with Mendoza freeing nine hostages - six tourists, a Filipino photographer and his Filipino assistant. Fifteen tourists and the Filipino driver were left on board.

Then the situation unraveled. Mendoza demanded a signed promise from the city ombudsman that his case would be reviewed, but its delivery was delayed for hours, in part by Manila's notorious traffic, and when it finally arrived he rejected it as insufficient.

"But the problem was it wasn't delivered before the shooting started," he told DZMM radio on Tuesday.

Police made an initial attempt to board the bus after Mendoza grew agitated while talking to his brother and shot at a police sharpshooter, said Nelson Yabut, head of the assault team.

The Filipino bus driver later managed to escape and reported that Mendoza had fired at the tourists. Mendoza was then shot in the head, police lobbed tear gas into the bus and commandos stormed the vehicle by smashing windows and the back door with sledgehammers.

Police managed to rescue eight passengers during the ordeal, many of them wounded and one of whom later died in hospital. Mendoza and seven passengers were lying dead, one of them slumped on the bus steps.

"I hid under a seat (when the gunman started to fire)," Wang Zhuoyao, 15, told reporters from a hospital bed. "Then the police dispersed gas. People in the bus were struggling. I could hear that many people couldn't breathe."

A freed hostage who gave only her surname, Ng, told Hong Kong reporters that she saw her husband killed by Mendoza after he tried to subdue the gunman.

"He was very brave. He rushed forward from the back of the bus. He wanted to prevent the gunman from killing people. He sacrificed himself," she said.

She said that Mendoza at first "did not want to kill us, but since the negotiation failed, he shot to kill people."

Tourism Secretary Alberto Lim said the hostage crisis would likely damage the country's tourism industry. "We will have cancellations," he told The AP early Tuesday in a Manila hospital, where some of the former hostages were confined. "I'm hoping it will be forgotten soon enough."

Hong Kong leader Donald Tsang said he was "disappointed" at how the incident was handled. His government canceled planned tour groups to Philippines and asked Hong Kong tourists in the country to leave.

Tsang told reporters that one of the survivors was in serious condition with a head wound.

Many Hong Kong newspapers printed mastheads in black out of respect for the victims, and flags in the territory flew at half-staff.

"Clearly, if local police used more decisive and professional rescue methods, maybe the bloody tragedy could have been avoided," the Hong Kong Economic Journal said in an editorial on Tuesday.

The South China Morning Post called the killings "a wake-up call" for the Philippines to boost security and take gun-control measures.
By Associated Press Writer Hrvoje Hranjski. Jim Gomez, Teresa Cerojano and Oliver Teves in Manila, and Min Lee in Hong Kong contributed to this report