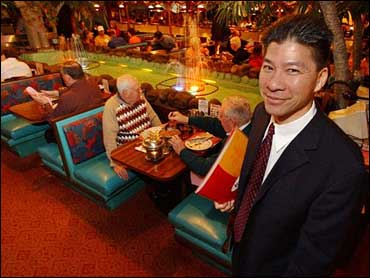 It's not exactly chestnuts roasting on an open fire. But for many people, Moo Goo Gai Pan or maybe even the Pu Pu Platter are traditional dishes for Christmas.

On Christmas Eve, Christmas Day and throughout the holidays, Chinese restaurants do some of their briskest business of the year.

"As the years went on, we became busier and busier during the holidays," said Stanley Wong, whose family has owned the Kowloon restaurant in Saugus for more than a half century.

Jewish customers account for much of Wong's business this time of year. Chinese food has long been a popular destination for Jews on Christmas, when few other restaurants are open.

"Chinese restaurants, Asian-owned restaurants, those owners tended to be the only folks who didn't have Christmas, too," said Rabbi David Kay of Congregation Ohev Shalom in Orlando, Fla.

He said the many vegetarian items on Chinese menus are appealing to people who keep kosher.

For David and Maure Gardner, eating kosher Chinese food on Christmas is a tradition.

"On Thanksgiving, we have turkey," said Maure Gardner, who was dining with her husband at the Eden Wok in New York City. "Christmas Day, we always go out for Chinese food."

Coincidentally, the Jewish festival of Hanukkah began at sundown on Christmas. For that reason, the restaurant added potato latkes to the menu, which features plenty of fish, chicken and duck but is free of pork and shellfish. A rabbi monitors the kitchen to make sure the food is prepared in accordance with Jewish law.

"And you don't have to be Jewish to come. Not all the jokes are based on the Jewish faith," said Pam Lawrence, who helped organize the event. "Last night, we had a whole contingent from Australia, and only some of them were Jewish."

At Kowloon, the restaurant in Saugus, Gino Ferrir and his family brought a pile of Christmas presents to unwrap as they waited for their lobster, shrimp and duck dishes to arrive.

"We come here every Christmas," Ferrir said Sunday. "It's my treat to my family."