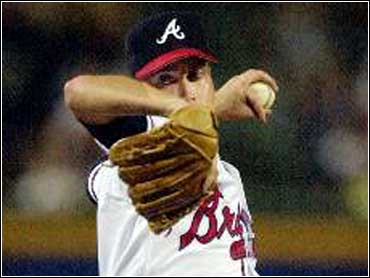 Braves manager Bobby Cox picked up the 1,599th victory, tying him with Hall of Famer Tommy Lasorda for 14th on the career list.

St. Louis rookie Britt Reames, making his second big league start, left after five innings with a 4-2 lead and a chance to pick up his first win in the majors. But the bullpen let him down.

Mike James gave up a two-out, two-run single to Paul Bako in the sixth, tying it at 4. Mike Timlin (4-4) was even worse the next inning, giving up a leadoff walk to Rafael Furcal and a single to Andruw Jones before Chipper Jones put the Braves ahead for the first time all night.

On a 1-1 pitch, last year's NL MVP pounced on a low fastball and lined it over the 390-foot sign in right field for his 30th homer of the season the fourth time in his six-year career that he's reached that level.

The Mets remained two games behind the Braves in the NL East. St. Louis's lead in the Central dropped to 7@1/2 games over Cincinnati, which blanked Florida 6-0.

Glavine gave up leadoff hits in four of his seven innings, but managed to pitch out of serious trouble. He allowed eight hits and four runs, three earned.

Terry Mulholland pitched a scoreless inning before Kerry Ligtenberg came on in the ninth for his 12th save.

Reames surrendered just four hits and two runs. But James couldn't pitch around an error by second baseman Fernando Vina in the sixth, giving up a pair of unearned runs when Bako, filling in for the injured Javy Lopez, singled to left with the bases loaded.

The Cardinals scored an unearned run of their own in the second when Reames hit a high hopper over the mound with two outs, but Furcal fumbled the ball away trying to rush the throw as Edgar Renteria trotted home from third.

St. Louis pushed its lead to 3-0 in the fourth. Ray Lankford led off with a single, Renteria walked and J.D. Drew lined an RBI single to right. Renteria moved to third on Drew's hit and scored when Mike Matheny hit into a double play.

In the bottom half, the Braves got two runs back, beginning with Andruw Jones' 29th homer to lead off the inning. Chipper Jones walked and B.J. Surhoff singled to center, putting runners at first and third with no outs.

Reames almost escaped the jam, striking out Andres Galarraga and getting Keith Lockhart on a pop to the shortstop, but the rookie pitcher was called for a balk when he flinched slightly at the begining of his windup to Reggie Sanders.

The Cardinals stretched their lead to 4-2 on Matheny's run-scoring single.