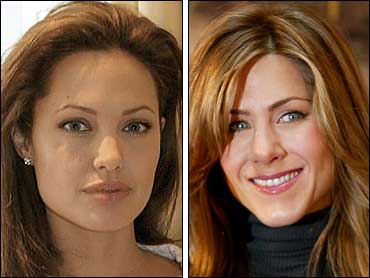 This column was written by Susan Rucci.

Have you noticed that it has become more and more labor-intensive to be a celebrity watcher today? Gone are the days you could read your People Magazine, National Enquirer or Vanity Fair and learn all the intimate TMI (too much information) details about your favorite or least favorite celebrities without making a life commitment. Celebrities could blab about their drug addictions, sex addictions, terrible childhoods, eating disorders, love lives, thoughts on politics, life and money. All that personal drama, and you could take it all in risk free with no obligations! I miss those days.

Lately, I feel like I'm getting dragged into every little catfight going on in Hollywood. More and more celebrities are revealing personal details about their lives and relationships with other celebrities and using the public as a mediator to decide who is right and who is wrong. I feel like every time I hear about one of these fights I gotta pick a team to be on.

Take for instance the latest catfight between two B-list celebrities. I just read that actresses Heather Locklear and Denise Richards, said to be former best friends, hate each other now because Denise is dating Heather's ex, Bon Jovi guitarist Ritchie Sambora. The truth of the matter is I don't care about either one of these women, so you would think I wouldn't have to pick a team. But, I do. See Denise Richards is going through a nasty divorce right now with actor and CBS' "Two and a Half Men" star Charlie Sheen. In court papers that found their way onto theWeb (what doesn't these days?), Denise made some nasty accusations about Charlie's personal character and his abilities to be a father to their two small children.

I've always been a Charlie Sheen fan. Always. I've seen him through his drug overdoses, cheered him on from his movie roles in "Platoon" to "Ferris Bueller's Day Off." And, I giggle when I watch him on "Two and a Half Men." So, even though this fight between Heather and Denise has nothing to do with him, I still must pick a team. Team Heather.

Musicians Elton John and George Michael are in a tiff as well. Apparently, Elton thinks of himself as some sort of therapist about George's life and publicly said that George was living in "deeply unrooted unhappiness." George wasn't exactly thrilled with that very public diagnosis. Personally, I have never really forgiven Elton John for that Princess Diana version of "Candle in the Wind" that played over and over and over. Every time I hear it I cringe. In high school, I hung posters of George Michael from his WHAM days on my walls. I loved his Choose Life T-shirt from the "Wake Me Up" (before you Go Go) video. So, I picked Team George.

Same goes with Paris Hilton and Nicole Ritchie when their friendship fell apart. I'll admit I watched "The Simple Life." I always found Paris an overindulged, underwhelming presence on that show. But I liked Nicole. She had spunk no matter what the assignment. Even, if she is too thin now, I pick Team Nicole.

"American Idol" has teams as well. It has nothing to do with the contestants. Host Ryan Seacrest and Judge Paula Abdul are fighting with each other or so we've been told through various leaks to the press. They can't even agree publicly whether they are in fact speaking to each other or not. I think Ryan does a good job as a host on "American Idol." But I also love when Paula gets a little loopy during the show and cries and slurs sweet nothings at the contestants and then randomly hits Simon during one of her incoherent outbursts. Some good television there. It was a hard choice but I guess I'll go with Team Ryan. He gets abused a lot from Simon as well.

Remember when Tom Cruise and Brooke Shields were battling over post partum depression? I picked Team Brooke. Oh and even though nobody asked, I pick Team Anti-Scientology. I'm ready to rumble with Tom Cruise over that any day. So are a lot of other people. Tom Cruise is an example of how you can pick one team and then regret the decision later on. When Tom and actress Nicole Kidman divorced, a lot of people at first bought the Cruise camp assertion that Nicole was to blame for the breakup. But then slowly couch-jumping episodes occurred, and, well, Team Kidman rebounded very nicely with an Oscar win as well.

Recently teams were formed for the Nick and Jessica breakup. I watched their reality show "Newlyweds" religiously every week. I saw how poorly Jessica treated Nick, like the time he was upset with her for purchasing $1,500 bed sheets. Nick was so misunderstood. But not by me. I threw my support behind Team Nick. Plus, he's cute.

I imagine that "teams" have always existed in Hollywood and everywhere else in life. Very rarely do we get to be neutral on anything anymore. Ask your friends about their team alliances when it comes to the Iraq war, President Bush, abortion, gay marriage, Terri Schiavo or "Nick and Jessica" and in general everybody has picked a team on these issues. Hollywood cat fights are easy compared to the issues most Americans must make choices about.

Kitson clothing store in Los Angeles actually began this "team" trend last year after Jennifer Aniston and Brad Pitt separated and Pitt shortly thereafter took up with Angelina Jolie. The store began selling T-shirts with logos that read either Team Aniston or Team Jolie. Whichever one you purchased at a ridiculously inflated price was the "team" you were on. Psychologists even commented on what kinds of people would purchase T-shirts for Aniston or Jolie. Obviously, women whose husbands left them for another woman bought the Team Aniston T-shirts.

I actually picked Team Jolie and I based it on my own experiences with each actress. CBS News sent me to the 1999 Screen Actors Guild awards as a producer along the red carpet. My job was to get the actors and actresses there to talk to me. Angelina Jolie, dressed all in white as I recall and looking absolutely stunning, not only stopped to talk to me but she was also very friendly. When I told her how beautiful she looked, she actually acted surprised and modest and responded by saying, "oh that's so sweet, thank you." She chatted with me about the SAG awards, why she was there and what a great evening it was for Hollywood. Plenty of usable soundbites! Meanwhile, Jennifer Aniston stood waaaaayyyyyyyyyy over there far away from me and the rest of the press corps with her "Friends" cohorts who refused to talk to any of us. That decided it for me. Plus, I really can't wait for the baby.

Susan Rucci is a producer for CBS News when she's not reading celebrity/pop culture blogs and magazines.