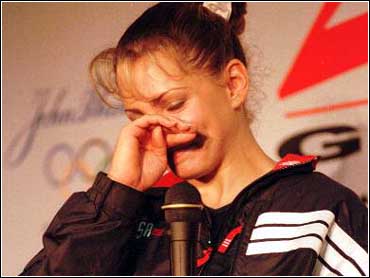 Amid the shrieks of glee and the tears of joy, Amy Chow and Dominique Dawes searched the room until they finally locked eyes. They didn't need to say anything. The teammates knew exactly what the other was thinking.

The first and last members of the Magnificent Seven to come back are going to the Olympics again, and doing it together makes it that much sweeter.

"I didn't need to have a conversation with her because we know what the Olympics are about," Dawes said. "Sometimes it's just an eye glance, because we know that we've been there before."

Dawes was named to her third Olympic team Sunday night at Olympic trials, Chow her second. But fellow Mag Seven member Shannon Miller will have to be content with her memories of Atlanta after jamming her knee and withdrawing after her first event.

Alyssa Beckerman, who finished eighth, is the alternate.

"I always imagined being on the team, but your imagination can only go so far," Ray said. "Standing up on that floor with everyone is amazing. Being a part of it is 2,000 times better than imagining it."

Left out was Vanessa Atler, who, as the junior champion in 1996, was expected to be the next American darling. But she came into the trials in fourth place and moved steadily downward.

She botched every one of her events, looking up at the sky after she stepped forward on her dismount as if to say, "What is going on?" Atler finished sixth, but her inconsistencies made her too big of a chance for Sydney.

"It (stinks), it really does," she said. "But I think deep down in my heart I knew I wasn't as prepared as everybody else. When my name wasn't called, I almost had a sense of relief because deep down I knew I shouldn't be going because I knew I wasn't ready.

Once again, it's the perfect time for Chow and Dawes.

The weighted scores from trials (60 percent) and last month's U.S. Gymnastics Championships (40 percent) were combined to rank the women.

A selection committee headed by Bela Karolyi then picked the six-woman team, but it wasn't bound by the scores. That meant someone with a lower score could be selected over someone who finished higher.

That's exactly what happened as Dawes, who finished seventh, was chosen over Atler. But no one who watched the meet could disagree with the committee's choices.

"Unfortunately, in two back-to-back competitions, Vanessa couldn't prove capable of representing the country with the expectations we needed," Karolyi said.

Dawes as only been training seriously since May 1, and her return has been nothing short of spectacular. She got better with every meet, moving from 12th after the first round of nationals to fifth in Sunday night's competition.

She has almost all of the hard tricks that everybody else has, and what she lacks in difficulty, she makes up for in presentation. She brought down the house on her final event, the balance beam.

Though the two competitors before her had faltered on the beam, Dawes did back flips and tumbled with ease. The fans were on their feet as she landed perfectly, and even though she waved to them when she finished, they stayed standing until she came back up for a curtain call, this time blowing kisses to them.

The routine even brought Karolyi to his feet. He left his seat for one of the first times of the night, rushing across the floor to hug Dawes and Hill. On his way, he looked into the crowd and pumped his fist at the fans.

"I came back because one, I love the sport and two, I knew I could help the country out," Dawes said. "I knew if I gave it my best shot I could be happy with myself and if I didn't make it, it would be a great way to end my career."

Anything less than a spot on another Olympic team would have been a disappointment for Chow, who took a year off from Stanford to train. She needn't have worried.

She has the tough tricks that can put the United States back on the medals podium, but she does them so effortlessly it makes people in the audience think, "Hey, I could do that."

Think again. On her first vault, her opening event, Chow nailed a Yurchenko double twist. In plain English, that means she did a roundoff onto the springboard, hurtling through the air, twisting twice before landing flat on her feet.

"I'm pretty psyched about this," Chow said. "My second Olympics, it's pretty cool."

Miller's comeback didn't end nearly so well. A hairline crack in her right leg allowed her to do only one event at nationals before withdrawing, and she got hurt on her very first event Sunday night.

She left the floor crying when she withdrew, but hoped to make the team through the petition process. That wasn't even an option, Karolyi said.

"I wish she had decided to start back earlier and pick up more physical fitness," Karolyi said. "But considering her physical status, it's hard to consider her ready for the full speed and full pressure of the Olympics."

With Miller out and Atler struggling, that opened the door for White and Dantzscher.

White, who had troubles at nationals, showed the consistency during trials that Karolyi loves so much. She revved the crowd up with her final routine, tumbling and twirling across the floor to lively salsa music. She had a huge grin on her face as she finished, and she exchanged a triumphanhigh-five with Beckerman, her training partner.

Though Dantzscher was in fourth place coming into the finals, she was probably the most vulnerable. She faltered badly on the balance beam, falling twice, but the grit she showed in her first three routines probably saved her.

When Dantzscher heard she was going to Sydney, she began sobbing, burying her face in her coach's shoulder.

"I was just so happy," Dantzscher said, tears welling in her eyes. "The feeling inside is just huge. You can't even describe it." 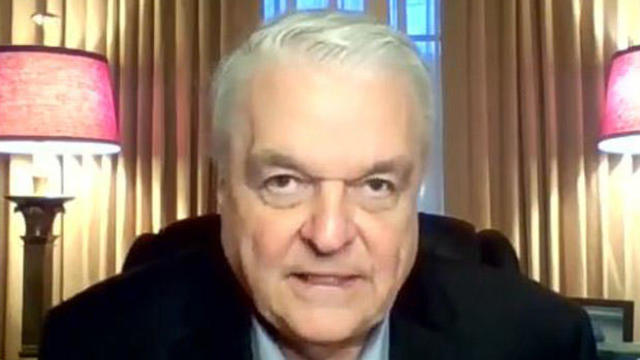 "We are on a rapid trajectory that threatens to overwhelm our health care system, our frontline health workers, and your access to care," the governor said.