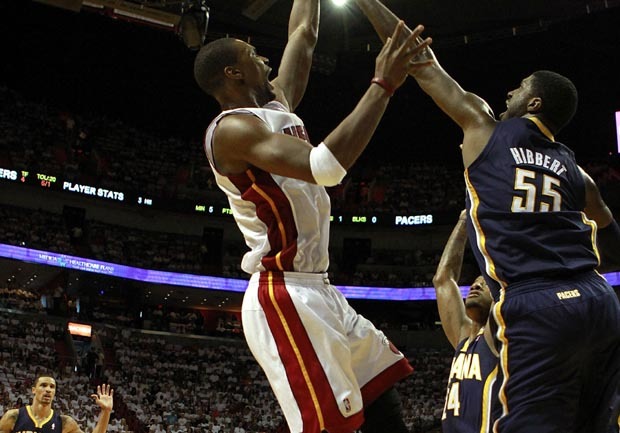 (AP) MIAMI - When LeBron James and Dwyane Wade were busy recruiting Ronny Turiaf, they viewed it as an insurance policy of sorts for the Miami Heat.

He may turn out to be a very important one.

Now that All-Star forward Chris Bosh is out indefinitely — almost certainly the rest of the Eastern Conference semifinal series against Indiana, and possibly longer — with a strained abdominal muscle, Turiaf will be among those asked to fill the void.

Miami's series against the Pacers resumes with Game 2 on Tuesday night, a game where the Heat will use Turiaf, Joel Anthony and probably others to play what would have been Bosh's minutes.

Bosh was hurt late in the first half of Game 1 on Sunday, on a play where he drove for a dunk and got fouled. He was in immediate pain, checked out of the game when the pain became too unbearable one possession later, and was diagnosed with the muscle strain. An MRI on Monday confirmed that diagnosis.

While the injury could have been worse, it's also a frustrating deal for Bosh and the Heat. Typically, an injury like Bosh's only heals with time and rest, two things that are in short supply during the playoffs. So he'll sit until he's healthy again, with neither he nor the Heat certain of how many weeks that will wind up taking.

"Listen, there's no honor amongst thieves in this league," Heat forward Shane Battier said. "No one's feeling sorry for us, or for Chris, outside of our locker room. And that's OK. We don't have any pity on anybody else."

At the team's shootaround practice Tuesday, Heat coach Erik Spoelstra did not commit to Turiaf as the starter for Bosh, who opened Game 1 at center for Miami.

"Everything's on the table now," Spoelstra said. "The dynamic changes. That's what I told the team. And we have to be able to use our versatility when we see fit and that could change. This is the playoffs. We don't have a lot of time to tinker."

James repeated a familiar phrase on Tuesday, saying Bosh has been perhaps the most important part of Miami's recipe for success.

"A lot of people don't see it that way or believe it that way," James said. "But he does so many things for our team, offensively and defensively. ... We know he'd love to be in uniform, but at this point in time he can't."

The only thing about rotations for Miami going forward that's certain is this: James and Wade will play a big amount of minutes until Bosh returns, and James may play more minutes at power forward — a particularly taxing spot for him because of the added wear-and-tear that comes with the physicality of playing down low — than he has in past playoff runs.

James and Wade both said they're fine with the extra minutes, if that's what it's going to take for Miami to win.

"We feel so badly for Chris right now," Spoelstra said. "We don't know what it means. ... But the bottom line is it's a no-excuse season and we've prided ourselves on being a no-excuse team."