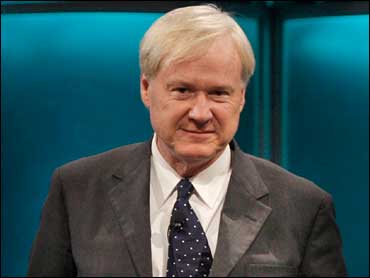 Chris Matthews is dead serious about running for the Senate in Pennsylvania - and shopping for a house in the state and privately discussing quitting MSNBC as proof of his intense interest, according to NBC colleagues, political operatives, and friends.

The garrulous host of the show "Hardball with Chris Matthews" has already picked out a home in Philadelphia to establish residency in the state, according to a Democratic operative in discussions with him about a potential candidacy. Over Thanksgiving weekend, at his vacation house in Nantucket, Matthews' family gave him their full backing.

As speculation surrounding his potential candidacy heats up, Matthews has also been asking advisers whether to step down from his MSNBC post well before his contract expires in June. At one recent meeting, he was advised that if he truly intends to run, he should resign from the network as soon as possible.

"We talked about the value of doing this now and six months from now. I advocated that he do this as soon as possible," the operative said. "It's the MSNBC stuff that's going to jam him up. I said, 'if you want to be a U.S. senator, step up and get into the race.'"

If Matthews is serious about running, some within the network hope he commits to the Pennsylvania Senate race sooner rather than later. Otherwise, his nightly presence on "Hardball" provides easy fodder to critics fueling the narrative that MSNBC is in the tank for the Democratic party. After NBC News was stung by criticism during the presidential campaign-charged with bias resulting from the antics of more outspoken personalities on MSNBC-staffers worry the situation will be repeated over the next six months.

To those speaking to him, all signs point to a candidate who is gearing up to run for the Senate seat held by Republican Arlen Specter. Either that or the MSNBC host is doing an awfully good job making people think he's running, perhaps, some say, for use as a bargaining chip in his upcoming contract negotiations.

Matthews, in an interview with the New York Times last April, said he has a "lot of options" when his MSNBC contract expires. "I'm a free man starting next June," he said.

But would the campaign trail provide the kind of freedom he's seeking?

"He genuinely wants to do this. He's talked to all the right people and understands what it takes. He's doing it for all the right reasons," the operative said. "No one can accuse him of doing this to achieve fame and fortune. He's already got that."

On Monday, Matthews met with two Democratic attorneys and the state's incoming treasurer to discuss the Senate race at the Philadelphia-based law firm Wolf Block, according to Roll Call. That night, "Hardball" broadcast from Philadelphia, ostensibly for the National Governors Association meeting, a gathering that didn't actually start until Tuesday. Also on Monday night, following "Hardball," Matthews headed across the river to Camden, New Jersey, where he gave the keynote speech at a hospital fundraiser.

So was Matthews in Philadelphia to meet with operatives or to host a cable news show? When asked about the coincidence, an MSNBC spokesperson issued a terse "no comment."

Few who know Matthews doubt his sincerity about fulfilling his boyhood dream of becoming a senator. He went so far as to mention it to Stephen Colbert in April. The only question is whether he wants to leave behind his show and the comfortable lifestyle he's grown accustomed to.

"There's no cost to it, and helps him in [contract] negotiations," said a network colleague who's spoken to Matthews about running. "I don't think he wants to leave Chevy Chase, particularly. I think the chances of it are slim."

"He's trying toshow, 'I have this alternative opportunity,'" said a Matthews friend, who considers the Senate flirtation a way to get the network to ante up.

It's likely that Matthews won't be pleased with the network's next offer, so it's understandable that some view the Senate talk as an attempt to ratchet up his own value to NBC.

Currently, Matthews is pulling in around $5 million a year, though it's widely believed that he'll be offered less this time around. Around the network, those who considered Matthews overpaid after he inked his current deal called the contract "Bob Wright's folly"-a reference to the former NBC Universal Chairman.

It's highly unlikely that Matthews' deal will match the one offered to another MSNBC host, Keith Olbermann. Earlier this month, the network scrapped Olbermann's contract and reportedly upped his yearly take from $4 to $7.5 million, through 2012.

Staging publicity-seeking stunts with contract negotiations on the horizon isn't an uncommon practice. And strategic leaks and disinformation remain part of the game when it comes to hammering out multi-million dollar deals in the public eye.

Just as rumors circulated that David Gregory, who's expected to take the reins of "Meet the Press," was being pursued by ABC, there's been talk of Matthews being a contender to host "Face the Nation," once Bob Schieffer retires.

But it's one thing to fuel a rumor of heading to a desk at a rival network. It's quite another to actively reach out to political players throughout Pennsylvania.

"He is interested, and that's about all I can say," said Hoeffel. "The downside of his celebrity is that people may think he's out of touch with the state. That's what he has to overcome. In Chris' case, he needs to shut up and listen. He has to change the way he talks to people."

Hoeffel said that Matthews needs to reconnect with his Philadelphia roots after spending much of the last three decades in Washington as a talk-show host after his stint as an aide to former House Speaker Tip O'Neill.

"The advice I gave him both times we spoke is that if he wants to do this he needs to get back to Pennsylvania and do a Hillary-style listening tour in 2009 to reconnect with the state where he was born," Hoeffel said.

Simply donning a Phillies cap and shirt-as Matthews did on "Hardball" the evening after the team won the World Series-will not be enough.

Matthews also drew the ire of feminist groups during the presidential primary when he said Clinton got where she was because "her husband messed around." He later apologized for his remarks, but they could cost him among female voters in a Democratic primary.

"Treating Hillary Clinton badly during the primary is going to come back and haunt him," said one Democratic operative aligned with a potential rival of Matthews. Noting the comparisons between Matthews and Al Franken, another celebrity Senate candidate, the operative noted: "At least the liberal base of the party liked him. The liberal base really dislikes Matthews."

Matthews is far from a shoo-in, and perhaps he'll look at the potential challengers and back off. In that case, there's a possible benefit for Matthews in negotiating with the network-which is now in a lose-lose situation.

"As a news organization you certainly wouldn't want to be in the position where you were giving a candidate an advantage, by putting him on the air every night if he were running," said Tom Rosenstiel, director of Pew's Project for Excellence in Journalism.

Matthews isn't the first cable news host to consider a try at the world of elected politics. Back in November 1991, before officially entering the presidential race, Pat Buchanan took two weeks leave at CNN to consider whether to run and returned after his unsuccessful primary bid.

Rosenstiel said it's not fair "to penalize or fire someone for contemplating something." But even if there isn't an exploratory committee or declaration of candidacy yet, Rosenstiel said there's a question of whether the network needs to act once there's a "critical mass of speculation."

That time may be close at hand. When MSNBC.com's "First Read" blog reported on the Pennsylvania Senate race on Tuesday, researcher Domenico Montanaro didn't mention Matthews by name, and instead wrote that there's "a lot of speculation on the Democratic side about possible challengers to Sen. Arlen Specter in 2010."

If Matthews refuses to rule out the possibility of a Senate run, and MSNBC brass and journalists sweep it under the rug, rival networks are likely to increase the pressure on him to make up his mind.

"Senator Specter, you've seen these reports out there that Chris Matthews, the anchor for MSNBC, is think[ing] of running in his home state of Pennsylvania as a Democrat against you when you're up for re-election in 2010. A, do you believe these reports? B, what do you think?"

"I'll be prepared," Specter said, "whoever my opponents are."
By Josh Kraushaar and Michael Calderone