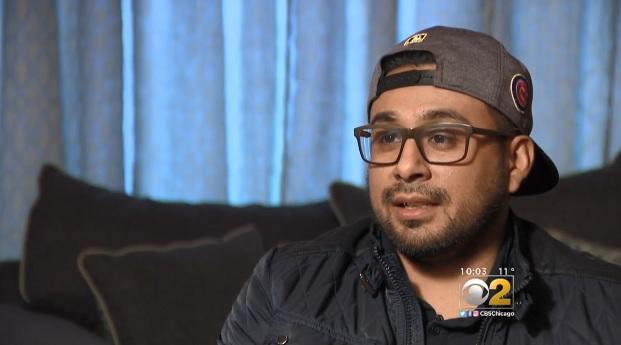 CHICAGO -- Christian Gomez Garcia went to court this week for a traffic ticket, but was subsequently arrested by immigration officers. CBS Chicago spoke to the DACA recipient, who was released from jail Thursday morning.

"I step out of the courthouse. They say my name. I never expect they would be ICE agents," the 29-year-old said, referring to Immigration and Customs Enforcement. "I thought they were regular people. As soon I said, 'Yes, my name is Christian,' I just basically got turned around and handcuffed."

Garcia was transferred by deportation officers from the courthouse to a holding facility in Wisconsin. He was jailed for nearly three days.

"You can't tell whether it's night or day. It's horrible, sitting down in a square room," he said.

Garcia's mother, Luz Maria Garcia, was upset following the ordeal, saying her son works and studies. The rest of their family is in Mexico.

ICE officials announced Garcia's release, but did not explain why he was detained. Garcia says he was told it was a computer glitch.

Garcia and his mother came to the U.S. when he was just 5 years old. He has been a DACA recipient since 2012. Garcia applied for an extension, but mistakes on his renewal application delayed the process.

"For us to be treated as criminals, that tells you that they don't care about us," he said.

An attorney representing Garcia says he should not have been arrested, citing a federal court order that protects him while his application is being processed. They plan to file a complaint in federal court.