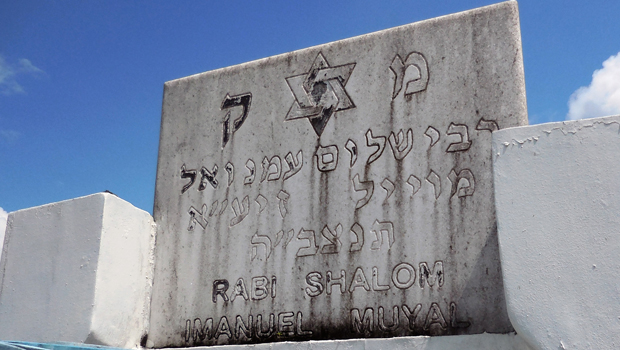 MANAUS, Brazil - Deep in the Amazon rainforest, but right in the middle of the jungle region's biggest city, lies the final resting place of the "Jewish saint."

Yes, that's right. Rabbi Shalom Imanuel Muyal, who died of yellow fever in 1910, is still revered by Christians in Manaus as the "santo Judeu." Or, more simply, "o rabino."

A paradox it may be, giving a rabbi a religious title reserved for Christian luminaries, but the unofficial accolade is something both the Catholics and Jews in the area have come to accept.

"The Jewish community never considered him a saint," said Anne Benchimol, the former president of the Jewish community in Manaus and now its director of education. "But the whole Christian community started going there (to his gravesite) and treating him as a saint."

Local Christians in the Amazonian city have made it a tradition to turn up at Muyal's burial spot in the Saint John the Baptist Cemetery to pray for miracles. When their prayers are answered, they put up small signs of thanks.

Today, there are dozens of those signs on the small walls surrounding the tomb.

"Many people still come and visit the grave," said Nailza de Castro, who works at the administration office in the cemetery. "Both Jews and Christians."

No one, however, has come to pray for a Brazilian victory at the World Cup. Not yet, anyway.

The city of Manaus, population 1.8 million, has a tightly-knit Jewish community of about 850 people. These days, there is a synagogue in the center of the city, but there certainly wasn't much around when Muyal first came to town in the early 1900s.

Manaus began its existence as a Portuguese fort, founded in the late 17th century on the spot where the Rio Negro flows into the Amazon River, the planet's largest river by volume. The city blossomed during the rubber boom of the late 1800s, and that's about the time Jews from Morocco started making their way to the jungle. To support the growing community, Muyal was sent from Morocco to serve as a rabbi.

But he soon fell ill with yellow fever, and the legend of the "santo Judeu" started shortly after he died.

"When he got sick, nobody wanted to treat him because so many others were getting sick for the same reason," Benchimol said. "But one person from the community took care of him until he died."

That person, believed to be called Cota Israel, treated Muyal until he died and then continued to help other sick people, becoming a sort of miracle worker herself. But when she was asked about her special talents, she always credited Muyal.

"She said, 'I got the power from the rabbi, who was a saint,'" Benchimol said. "'Now I'm able to treat people because of him.'"

Plenty of people believed her then, and plenty still do now.

Jews also visit Muyal's resting place, which has a Star of David engraved at the top and Hebrew inscriptions around it, but is surrounded by Christian graves because Manaus didn't have a Jewish cemetery back in 1910.

Jewish people, as is tradition, leave rocks on graves. But Raimundo da Silva, a caretaker on the grounds who has been working at the cemetery for 28 years, said Christians have also been known to leave rocks in the hopes of boosting their chances of having a miracle answered by the "Jewish saint."

"People come all the time," da Silva said. "They come and place the rocks on the grave for good luck."

Benchimol said there have been attempts to move Muyal's remains back to Israel, or at least to the Jewish part of the cemetery, which was created a few years after the rabbi died.

The leaders of community have always decided against it.

"We were worried that if we would take him, the Christians would be, not mad, but a little disappointed," Benchimol said. "He is our ambassador, even though he is dead."