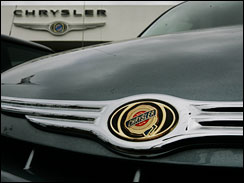 (AP Photo/Paul Sakuma)
The government's "Cash for Clunkers" rebate program to spur sales of more fuel-efficient cars has worked extremely well, with auto sales up. Some dealers, however, are complaining that they don't have the inventory to meet demand.

Now Chrysler is dropping its offer to increase the rebate offered by the government's Car Allowance Rebate System (CARS) program, which can be as high as $4,500 depending upon the car model purchased.

The Wall Street Journal's Kate Linebaugh reports today that Chrysler will drop its offer, started in July, to double the "Clunkers" rebate by adding up to $4,500 in incentives of its own for qualifying customers.

A Chrysler spokesperson told Linebaugh that the automaker is changing its message, focussing "less on the deal but more on the products."

Chrysler said its "double your cash" campaign succeeded at bringing buyers into dealerships.

But prolonged shut-downs of factories this year due to unsold cars as the company worked through its bankruptcy has depleted dealers' inventory, at least of cars that are eligible for rebates under the government program.

Pennsylvania car dealer Bill Rosado told the Journal, "I can't believe I'm saying this, I need more Chrysler inventory. My goodness, I've got to rehearse that line a couple times."