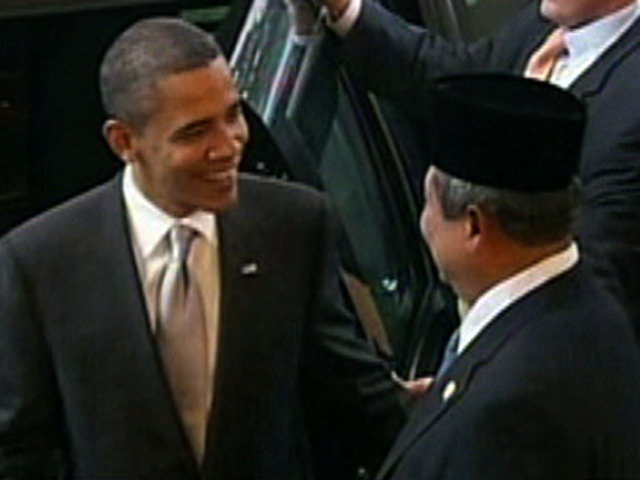 President Obama's visit to Jakarta, Indonesia this week has meant the exposure of some pretty colorful details about Mr. Obama's childhood - including the fact that those he grew up with describe him as a chubby child known as the "boy who runs like a duck."

Mr. Obama is in Indonesia, the world's most populous Muslim country, as part of his 10-day tour of Asia that included three days in India as well as coming visits to South Korea and Japan. The trip marks his first visit as president to the island that he lived on for four years as a child, beginning in 1967.

In an official press conference with President Susilo Bamband Ydhoyono on Tuesday, Mr. Obama said his return was a "little disorienting" in light of the drastic changes that have occurred in Indonesia in recent decades.

Still, he said, "the sights and the sounds and the memories all feel very familiar."

As the New York Times discovered, however, some in Indonesia remember a "Barry" Obama that most Americans may not be so familiar with.

As a child in Indonesia, Mr. Obama lived with his mother, Stanley Ann Dunham, and his Indonesian stepfather, Lolo Soetoro, in the quaint neighborhood of Matraman-Dalam for two years. According to the Times, several community members fondly remembered "Barry" as a bit of a trouble maker.

"Barry was so naughty that my father even scolded him one time," said former neighbor and classmate Sonni Gondokusumo, 49.

He apparently wasn't particularly graceful, either. Community leader Coenraad Satjakoesoemah said the then-chubby "Barry" Obama was known as the "boy who runs like a duck."

The Times also discovered that Mr. Obama's nanny in Indonesia, which has an open-minded attitude toward homosexuality, was an openly gay man who dated a local butcher. The nanny later joined the Fantastic Dolls, a transvestite group of the kind common in Jakarta that entertained people on the street with dancing and playing volleyball.

Some on the right suggested during Mr. Obama's presidential campaign that he had attended a radical madrassa while in Indonesia. Former students at the Menteng school scoffed at that characterization. While many of the students at the school are Muslim, it draws the children of the elite in Indonesia. The school did not even have a prayer room when Mr. Obama attended; a mosque was built on the grounds in 2002.

Mr. Obama's desire to be president one day may have been evident even from a young age, according to a story childhood friend Slamet Januadi told the Times.

"Then Barry said he would become president and order the soldier to guard him and the businessman to use his money to build him something," Mr. Januadi said. "We told him, 'You cheated. You didn't give us those details.'"