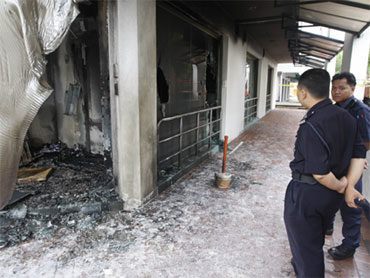 Three churches in Malaysia were attacked with firebombs, causing extensive damage to one, as Muslims pledged Friday to prevent Christians from using the word "Allah," escalating religious tensions in the multiracial country.

Many Malay Muslims, who make up 60 percent of the population, are incensed by a recent High Court decision to overturn a ban on Roman Catholics using "Allah" as a translation for God in the Malay-language edition of their main newspaper, the Herald.

The government says Allah, an Arabic word that predates Islam, is exclusive to the faith and by extension to Malays. It refuses to make an exception, even though the Herald's Malay edition is read only by Christian indigenous tribes in the remote states of Sabah and Sarawak.

"We will not allow the word Allah to be inscribed in your churches," one speaker shouted into a loudspeaker at the Kampung Bahru mosque. About 50 other people carried posters reading "Heresy arises from words wrongly used" and "Allah is only for us."

"Islam is above all. Every citizen must respect that," said Ahmad Johari, who attended prayers at the National Mosque. "I hope the court will understand the feeling of the majority Muslims of Malaysia. We can fight to the death over this issue."

The demonstrations were held inside the mosque compounds to follow a police order against protests on the streets. Participants dispersed peacefully afterward.

Malaysia is often held up as a model for other Islamic countries because of its economic development, progressive society and generally peaceful coexistence between the Malay majority and the ethnic Chinese and Indian minorities who are mostly Christians, Buddhists and Hindus.

The Allah controversy, however, has the potential to shatter that carefully nurtured harmony, drive a deep racial wedge and scare away sorely needed foreign investment as the country struggles to emerge from the global financial crisis.

Prime Minister Najib Razak condemned the attacks on the churches by unidentified assailants, who struck before dawn in different suburbs of Kuala Lumpur. He said the government would "take whatever steps it can to prevent such acts."

"We don't want this to spread out into something else. ... I am not only assuring the minorities, I am assuring all Malaysians — anybody who is in Malaysia — that they are safe," he told reporters.

In the first attack, the ground-level office of the three-story Metro Tabernacle Church was destroyed in a blaze set off by a firebomb thrown by attackers on motorcycles soon after midnight, police said. The worship areas on the upper two floors were undamaged and there were no injuries.

Two other churches were attacked hours later, with one sustaining minor damage while the other was not damaged. Church officials had earlier said a fourth church was attacked but they later retracted the report saying they were misinformed. National police chief Musa Hassan said the report of the fourth attack was a rumor.

No arrests have been made.

The tribespeople of Sabah and Sarawak, who speak only Malay, have always referred to God as "Allah," an Arabic word used not only by Muslims but also by Christians in Muslim-majority countries such as Egypt, Syria and Indonesia.

Many Malaysian Muslims say its use by others would mislead people, tempting them to convert to Christianity.

Since the verdict, hateful comments and threats against Christians have been posted widely on the Internet, but this was the first time the controversy turned destructive.

He said police found a wrench, an empty gasoline can and two scorched motorcycle helmets at the scene.

The backlash against the court verdict has reinforced complaints by minorities that they face institutional discrimination. They say it is almost impossible to get permission to build new churches and temples. Some Hindu temples have been demolished in the past. Court verdicts in religious disputes usually favor Muslims.