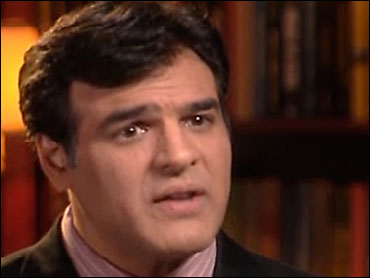 (AP Photo/ABC News)
A former CIA operative who two years ago said a top al Qaeda member provided useful intelligence about the terrorist organization after being subjected to waterboarding for less than a minute is now saying he was wrong.

(At left, in this Dec. 10, 2007, file photo, former leader of the CIA team that captured Abu Zubaydah, John Kiriakou speaks during an interview first broadcast on ABC's World News.)

The former operative, John Kiriakou, concludes his new memoir, "The Reluctant Spy: My Secret Life in the CIA's War on Terror," by telling readers he now doubts the usefulness of the intelligence Qaeda agent Abu Zubaydah provided because the information came not after a few seconds but after being waterboarded more than 80 times, Foreign Policy magazine reported.

In late 2007, Kiriakou told ABC News's Brian Ross that Zubaydah "answered every question" after being subjected to waterboarding for "30 to 35 seconds" during his interrogation.

"The threat information he provided disrupted a number of attacks, maybe dozens of attacks," Kiriakou said in 2007.

In his new book, Kiriakou writes he was "wrong on a couple counts" in his interview such as whether he actually saw Zubaydah's interrogation and how long it took for him to talk.

"I wasn't there when the interrogation took place; instead, I relied on what I'd heard and read inside the agency at the time," Kiriakou says in the book.

"Now we know," Kiriakou says, "that Zubaydah was waterboarded eighty-three times in a single month, raising questions about how much useful information he actually supplied."

Foreign Policy writes that Kiriakou claims the CIA played a trick on him when he unwittingly spread disinformation.

"In retrospect, it was a valuable lesson in how the CIA uses the fine arts of deception even among its own," Kiriakou writes.

"While I haven't read John's book, the line about deception doesn't make any sense," Gimigliano told Foreign Policy. "He apparently didn't know as much as he thought he did. That's a very different matter."