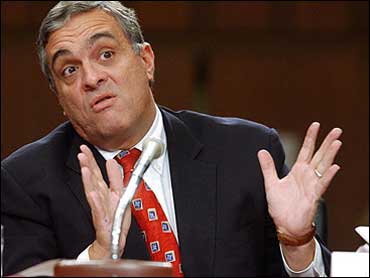 Senators pressed CIA Director George Tenet on Wednesday about whether President Bush's use of false information on Iraq's weapons program was the result of an isolated error, deeper intelligence problems or political manipulation.

Tenet appeared behind closed doors before the Senate Intelligence Committee five days after he took responsibility for allowing Mr. Bush to include his State of the Union speech a claim that Iraq had sought uranium in Africa. That claim was apparently based on a series of forged documents, purportedly from Niger.

Tenet did not speak to reporters as he entered the hearing room.

The committee's Republican chairman, Sen. Pat Roberts of Kansas, said he wanted to review the sequence of events that led to Mr. Bush including the claim in his speech and find out "what system broke down."

"This was not handled in a way that I would describe as being the most efficient, to say the least," Roberts said in an interview before the hearing.

He said had no indication intelligence problems on go beyond "those 16 words" included in Bush's speech.

"At this juncture I have no evidence that it is more of a systemic problem, but all of that we're going to deal with," he said.

Democrats say the uranium claim is only the most glaring example of problems with the prewar intelligence. They have stepped up their calls for a more thorough investigation of the intelligence, beyond the reviews under way by the House and Senate intelligence committees.

"There's a lot of other troubling evidence," said Sen. Carl Levin of Michigan, an Intelligence Committee member and the top Democrat on the Senate Armed Services Committee. "There may have been a pattern of exaggeration or stretching. So this is just one of a number of examples, it is not an isolated example."

He cited the administration's references to aluminum tubes as evidence of Iraq's nuclear program, even though the tubes are now believed to have been intended for other purposes; and claims that truck trailers seized in Iraq were biological weapons labs, even though State Department analysts have questioned that.

Sen. Ron Wyden, D-Ore., said his constituents "are concerned about whether political judgments are made first and then there is an effort to find a set of facts that will support the political call that's been made at the outset."

Sen. John Edwards, D-N.C., a presidential candidate and member of the committee, said Mr. Bush should take responsibility for the reference to the Niger uranium.

Tenet's appearance had been planned before he took responsibility for the uranium information being included in Mr. Bush's speech, Roberts said. He had been scheduled to discuss information sharing with U.N. inspectors.

Roberts said his committee "will take this investigation wherever it leads." Roberts has previously declined to describe the committee's inquiry as an "investigation," a term he described as "pejorative".

Roberts also denounced the "partisan flavor" of the discussion.

"I think that's to be expected when you have that many presidential candidates," he said.