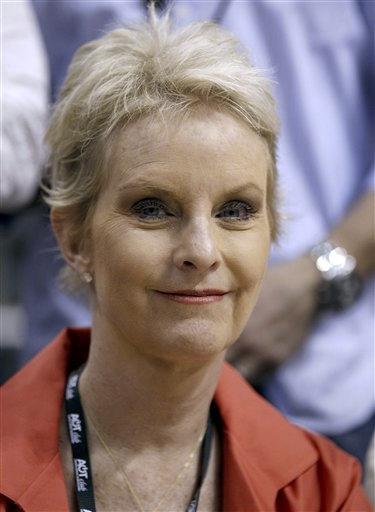 Cindy McCain appeared to very publicly differ with her husband, 2008 Republican presidential nominee John McCain, over the ban on gays serving openly in the military, opposing the policy in a new video while her husband works to maintain it for now.

Linking a recent spate of gay teens' suicides with politicians who support the "don't ask, don't tell" policy, Cindy McCain directly lays blame for the deaths with lawmakers and clergy who oppose gay rights. In a celebrity-filled anti-bullying video, Mrs. McCain says "government treats the (gay) community like second-class citizens" and does not give young people hope.

A message to the senator's office was not immediately returned.

The video was posted online by NOH8, a gay rights group that began in opposition to Proposition 8. California voters in 2008 passed that ballot measure that bans same-sex marriage. Mrs. McCain and daughter Meghan McCain appeared in ads for that cause and have previously split with the Arizona lawmaker on gay marriage.

The group's latest video features rockers Slash and Gene Simmons and reality show stars Denise Richards and Drew Pinsky. The celebrities tick through opportunities denied gays, such as donating blood or marrying in most states. Mrs. McCain, the mother of sons in uniform, then adds: "They can't serve our country openly."

"I fully support the NOH8 campaign and all it stands for and am proud to be a part of it," she wrote.

"But I stand by my husband's stance on DADT," she continued, referring to the "don't ask, don't tell" policy.

Hopes for repealing the 17-year-old policy have dimmed in the last week. The House and a Senate committee have approved the repeal but Sen. McCain has insisted lawmakers wait until he reviews a Pentagon study on the military's attitudes on repeal before voting in the full Senate. That report is due to Defense Secretary Robert Gates on Dec. 1 but it is not clear when the results will be released.

That 370-page study has concluded the military can lift the ban on gays serving openly in uniform with only minimal and isolated incidents of risk to the current war efforts, The Washington Post reported this week. The newspaper quoted two people familiar with a draft of the study.

Gates has ordered an investigation into the leak of details from the draft study.

More than 70 percent of respondents to a survey sent to active-duty and reserve troops over the summer said the effect of repeal would be positive, mixed or nonexistent, the sources told the newspaper. A Gallup poll in May found 70 percent of American favor allowing gays and lesbians to serve openly.

A Democratic proposal to repeal the 1993 law already has passed the House as part of a broader defense policy bill that includes such popular provisions as a pay raise for the troops. But that same legislation sank in the Senate under Republican objections just weeks before the Nov. 2 elections.

Senate Majority Leader Harry Reid, D-Nev., has promised another vote by year's end, although the political dynamics in this lame-duck session haven't changed much. Gates told reporters he would prefer Congress to act before year's end to start what could be a years' long process to fully scrap the policy.

Gay rights groups, meanwhile, are working to round up votes for this first step.

The organization also launched a grass-roots campaign in those states, as well as Alaska, Arkansas, Maine and West Virginia hoping to sway lawmakers from those states.

"Don't ask, don't tell" was imposed by a 1993 law intended as a compromise between President Bill Clinton, who wanted to lift the ban on gays entirely, and a reluctant Congress and military that said doing so would threaten order.