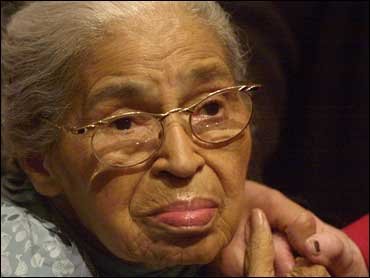 Rosa Parks, whose refusal to give up her bus seat to a white man was a watershed moment in the civil rights movement, died Monday at her home in Michigan at the age of 92.

Parks died Monday evening at her home of natural causes, with close friends by her side, said Gregory Reed, an attorney who represented her for the past 15 years.

Parks was 42 when she committed an act of defiance in 1955 that was to change the course of American history and earn her the title "mother of the civil rights movement."

At that time, segregation laws in place since the post-Civil War Reconstruction required separation of the races in buses, restaurants and public accommodations throughout the South, while legally sanctioned racial discrimination kept blacks out of many jobs and neighborhoods in the North.

The Montgomery, Alabama, seamstress, an active member of the local chapter of the National Association for the Advancement of Colored People, was riding on a city bus Dec. 1, 1955, when a white man demanded her seat.

Parks refused, despite rules requiring blacks to yield their seats to whites. Two black Montgomery women had been arrested earlier that year on the same charge, but Parks was jailed. She also was fined $14.

The Rev. Jesse Jackson got the news of Parks' death while in Johannesburg for a meeting with former South African President Nelson Mandela on fighting poverty and promoting freedom.

"We are saddened by the passing of Rosa Parks," said Jackson. "We rejoice in her legacy, which will never die. In many ways, history is marked as before, and after, Rosa Parks. She sat down in order that we all might stand up, and the walls of segregation came down. Paradoxically, her imprisonment opened the doors to our long journey to freedom."

"These three giants, Rosa Parks, Dr. King and Mandela - without bombs, bullets or wealth - have shown the awesome power of right over might in history's long journey toward peace and freedom," said Jackson.

"I truly believe that there's a little bit of Rosa Parks in all Americans who have the courage to say enough is enough and stand up for what they believe in," Rangel said. "She did such a small thing, but it was so courageous for her as a humble person to do."

Speaking in 1992, Parks said history too often maintains "that my feet were hurting and I didn't know why I refused to stand up when they told me. But the real reason of my not standing up was I felt that I had a right to be treated as any other passenger. We had endured that kind of treatment for too long."

Her arrest triggered a 381-day boycott of the bus system organized by a then little-known Baptist minister, the Rev. Martin Luther King Jr., who later earned the Nobel Peace Prize for his work.

"At the time I was arrested I had no idea it would turn into this," Parks said 30 years later. "It was just a day like any other day. The only thing that made it significant was that the masses of the people joined in."

The Montgomery bus boycott, which came one year after the Supreme Court's landmark declaration that separate schools for blacks and whites were "inherently unequal," marked the start of the modern civil rights movement in the United States.

The movement culminated in the 1964 federal Civil Rights Act, which banned racial discrimination in public accommodations.

After taking her public stand for civil rights, Parks had trouble finding work in Alabama. Amid threats and harassment, she and her husband Raymond moved to Detroit in 1957. She worked as an aide in the Detroit office of Democratic U.S. Rep. John Conyers from 1965 until retiring in 1988. Raymond Parks died in 1977.

Detroit - Parks' adopted hometown - showed its pride in having Rosa Parks among its midst by naming a street and a middle school for her and featuring a papier-mache likeness of Parks in the city's Thanksgiving Day Parade.

Parks said upon retiring from her job with Conyers that she wanted to devote more time to the Rosa and Raymond Parks Institute for Self Development. The institute, incorporated in 1987, is devoted to developing leadership among Detroit's young people and initiating them into the struggle for civil rights.

Detroit Mayor Kwame Kilpatrick knew Parks and says she "took my breath away, I can't think of any other expression. This is probably the most important figure in world history. The most important transitional moment in the civil rights or equal rights fight."

"She lived her day. She was born on a certain day and her sunset was today, but her dash in the middle was incredible. And she's an example for all people," Kilpatrick told WJBK-TV. "For one, I would not be standing here (as mayor) but for her sitting down and standing up at the same time."

"Rosa Parks: My Story" was published in February 1992. In 1994 she brought out "Quiet Strength: The Faith, the Hope and the Heart of a Woman Who Changed a Nation," and in 1996 a collection of letters called "Dear Mrs. Parks: A Dialogue With Today's Youth."

She was among the civil rights leaders who addressed the Million Man March in October 1995.

In 1996, she received the Presidential Medal of Freedom, awarded to civilians making outstanding contributions to American life. In 1999, she was awarded the Congressional Gold Medal, the nation's highest civilian honor.

Parks received dozens of other awards, ranging from induction into the Alabama Academy of Honor to an NAACP Image Award for her 1999 appearance on the CBS television drama series "Touched by an Angel."

The Rosa Parks Library and Museum opened in November 2000 in Montgomery. The museum features a 1955-era bus and a video that recreates the conversation that preceded Parks' arrest.

"Are you going to stand up?" the bus driver asked.

"Well, by God, I'm going to have you arrested," the driver said.

"You may do that," Parks responded.

Parks' later years were not without difficult moments.

In 1994, Parks' home was invaded by a 28-year-old man who beat her and took $53. She was treated at a hospital and released. The man, Joseph Skipper, pleaded guilty, blaming the crime on his drug problem.

The Parks Institute struggled financially since its inception. The charity's principal activity — the annual Pathways to Freedom bus tour taking students to the sites of key events in the civil rights movement — routinely cost more money than the institute could raise.

Parks lost a 1999 lawsuit that sought to prevent the hip-hop duo OutKast from using her name as the title of a Grammy-nominated song. In 2000, she threatened legal action against an Oklahoma man who planned to auction Internet domain name rights to www.rosaparks.com.

After losing the OutKast lawsuit, Reed, who represented Parks, said his client "has once again suffered the pains of exploitation." A later suit against OutKast's record company was settled out of court.

She was born Rosa Louise McCauley on Feb. 4, 1913, in Tuskegee, Alabama. Family illness interrupted her high school education, but after she married Raymond Parks in 1932, he encouraged her and she earned a diploma in 1934. He also inspired her to become involved in the NAACP.

Looking back in 1988, Parks said she worried that black young people took legal equality for granted.

Older blacks, she said "have tried to shield young people from what we have suffered. And in so doing, we seem to have a more complacent attitude.

"We must double and redouble our efforts to try to say to our youth, to try to give them an inspiration, an incentive and the will to study our heritage and to know what it means to be black in America today."

At a celebration in her honor that same year, she said: "I am leaving this legacy to all of you ... to bring peace, justice, equality, love and a fulfillment of what our lives should be. Without vision, the people will perish, and without courage and inspiration, dreams will die — the dream of freedom and peace."