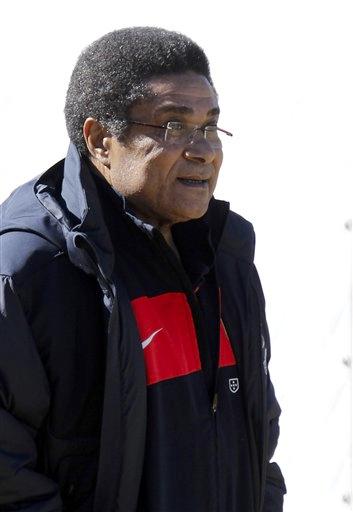 "American Bandstand" icon Dick Clark plans to watch his New Year's Eve show from the hospital bed where he is recovering from a stroke.

Clark, 75, suffered what was described as a mild stroke and has been hospitalized since Dec. 6. Regis Philbin is filling in for America's oldest teenager on ABC-TV's "Dick Clark's New Year's Rockin' Eve 2005" on Friday.

"Even though I won't be in New York this year, I will be watching 'New Year's Rockin' Eve' on TV and there's one tradition I intend to maintain," Clark said in a statement Wednesday.

"As I always have in the past, at midnight I plan on kissing my wife Kari and wishing her a happy new year," Clark continued.

Clark has been "doing some rehab," publicist Paul Shefrin said without elaborating. He wouldn't give any details about the impact of the stroke or discuss whether there was paralysis or impaired speech, as reported in the supermarket tabloids.

"I will neither confirm nor deny what's in the tabloids but there are things in the tabloid reports that are false," Shefrin said, noting, "I talked with him last night."

The spokesman insisted there is no cause for alarm and said doctors are thrilled with Clark's progress. For privacy reasons, the name of the hospital has been withheld.

"He's still in the hospital and there's nothing definite on when he will be released," Shefrin said Wednesday. "He will be there through the new year. It's all up to the doctors when he'll get out."

Clark's wife and children have been visiting the entertainer at the hospital and there has been a huge outpouring of support from friends and fans, Shefrin said.

Clark, who went from hosting "American Bandstand," "Bloopers" and game shows to producing awards ceremonies, has been a television New Year's Eve tradition for 32 years with his shows from Times Square.