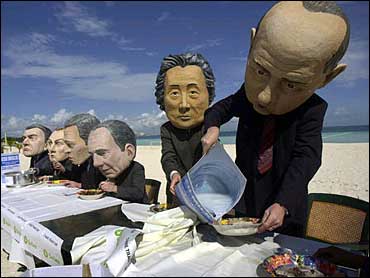 CBS Foreign Affairs Analyst Pamela Falk teaches international trade at the School of Law of the City University and is in Mexico at the World Trade Organization meetings this week.

Violent protests and a suicide at the police barricades sent a tragic message to the delegates of the World Trade Organization, who convened in Mexico's resort town of Cancún.

Reminiscent of the 1999 conflicts at the WTO meetings in Seattle, the siren call for inclusion by developing countries and farm groups was intended to send the message that trade policy affects the lives of the poor.

And for the first time since the WTO was founded, the agenda -- as well as statements by the President of Mexico, Vicente Fox -- were written to address the issue. "Poverty leads to exclusion and kills hopes for the future," Fox said in his inaugural address.

But just as the WTO opened the Fifth Ministerial Meeting, a South Korean farmer, Kun Hai Lee, fatally stabbed himself in protest. During a clash between police and at least 5,000 protestors, the man climbed up on one of the metal fences in the center of the city and waved a banner that read "WTO Kills Farmers." He then slashed himself in the stomach and died a few hours later in City's General Hospital. He was president of the Association of Korean Farmers and Fisherman.

Farmers from the state of Guanajuato, Mexican President Fox's home town, held a sign which read, "verguenza" -- shame in Spanish. They were part of a crush of protestors on Avenida Kukulkán. The demonstrators threw rocks and bottles and were cordoned off -- a location five miles from the Convention Center where the WTO meetings were taking place. That followed Monday's more symbolic protest, where two dozen activists took off their clothes on a town beach and lay down in the sand to form the words "No to WTO" in the sand.

A few dozen protestors broke through the metal fences surrounding the hotel zone, injuring both protestors and police. Others raised placards at the meetings which read "WTO Obsolete" and shouted down Mexico's Foreign Minister Luis Ernesto Derbez and WTO Director General Supachai Panitchpakdi. Through Thursday and Friday, protestors clashed with police.

Inside the Convention Center, delegates appeared to be worlds apart. Although differences exist between the U.S. and the E.U., both were criticized by Brazil and other developing countries for failing to more aggressively cut farm subsidies and prevent the dumping of farm products.

Why are WTO meetings such a source of anger? The answer is that the agenda of the meetings -- agriculture, medicine sales, and trade -- are truly life and death issues for the poor country members. Their argument is that the $350 billion that the U.S. and European Union give to their farmers makes the sales of food from poorer countries non-competitive.

But U.S. Trade Representative, Ambassador Robert B. Zoellick told CBS News that the U.S. supports the proposals to cut subsidies. "The U.S. has a $500 billion current account deficit," he said, which indicates that the U.S. continues to buy more than it exports.

And to show that they are listening, the 4,700 WTO delegates from 146 countries pre-negotiated a deal to relax patents on medicines sold by the major pharmaceutical companies. This would allow more inexpensive drugs to be sold to combat malaria, AIDS and other diseases plaguing sub-Saharan Africa, Southeast Asia and other poor nations. It's a concession long opposed by U.S. drug companies.

The draft resolution being circulated includes a reduction of tariffs and cutback on subsidies already included. OXFAM and other U.S. non governmental organizations at the meeting say it does not go far enough. But both sides have recognized the increased clout, one that has brought about the creation of country blocs, like the new Group of 21, a group of developing nations including China, India, Brazil and Egypt (as of this meeting), within the organization to argue for change.

That is not to say that the poor and rich are concrete groups. Some of the up-and-coming developing countries such as Brazil and India have differing agendas on trade. And the U.S. and EU are in trade battles over steel subsidies and hormone-fed beef.

In addition, a bit of history gives some perspective. Unlike the older post-war financial institutions such as the International Monetary Fund and the World Bank, founded in Bretton Woods in the 1940's, the WTO is a younger sibling, founded in 1995.

Back in 1982, at a Cancún Summit of Industrialized Nations which I attended before WTO was in existence, the rich countries came to Mexico to talk about foreign debt - just months before the major defaults of Mexico and other developing nations. Philippine President Ferdinand Marcos arrived with two 747s and all his personal bedroom furniture. Presidents Ronald Reagan and Francois Mitterrand of France held lavish banquets.

The decadence of that era has given way to a sobriety of a smaller world, even if the rifts still exist. The more modest mandate of the WTO meetings this time is to complete a new round of talks during the next fifteen months.

But a timetable and schedule to cut subsidies, reduce tariffs and stop dumping is the goal. And the Mexico meeting -- as a mid-term test of the Doha Agreements - appeared far in the distance on Friday.

The threat of increased trade battles is real, European Trade Commissioner Pascal Lamy said this week. Both rich and poor countries are aware of the cost. It's polanca, or leverage, said one of the Mexican delegates about the protestors. Mexico's President Fox set the tone of the meeting: "Poverty is the real enemy of the vanquished."