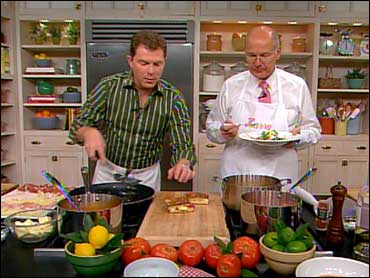 When fall comes around and it gets a little cold and blustery, tomato soup and a grilled cheese sandwich are hard to beat.

The Early Show's resident chef, Bobby Flay, loves comfort food, and offered his versions of the classic combination on the show Thursday.

Traditionally, cheddar is used, although in the United States a processed cheese known as American cheese is also quite popular. In the Netherlands, Gouda cheese is used most often, and ham is added to it. Other kinds of cheese can be used, such as Swiss cheese, but these are mostly regional variant.

The assembled sandwich is then placed on a griddle, pan or dedicated sandwich maker to be heated. Once the bread on the bottom half of the sandwich has reached a toast-like texture, the sandwich is flipped, and continues cooking until the other side has toasted or the cheese has melted.

1. Heat 1-inch of oil in a high sided medium sauté pan over medium high heat until it reaches a temperature of 350 degrees.
2. Add the tortilla strips in batches and fry until just crisp, 20-30 seconds.
3. Remove with a slotted spoon to a plate lined with paper towels and season immediately with salt.

1. Heat oil in a medium sauce pan over high heat.
2. Add onions and cook until soft, add the garlic and cook for 30 seconds.
3. Add the wine and cook until reduced by half. Add the tomatoes and enough water to cover the tomatoes by 1-inch.
4. Bring to a boil, lower heat to medium and simmer until tomatoes are very soft and start to break down, approximately 30 minutes.
5. Carefully transfer the mixture to a food processor and process (in batches if needed) until smooth.
6. Return to the saucepan, season with cayenne, salt and pepper and cook for 5 minutes.
7. Ladle into bowls and garnish with cheese, cilantro and a few fried tortillas.

1. Place the bread on a flat surface. Whisk together the mustards and mayonnaise in a small bowl and spread a teaspoon of the mixture on each slice of bread.
2. Top each slice of bread with a slice of cheese and a slice of meat (in that order) and combine the slices to make 4 sandwiches. Wrap the sandwiches in plastic wrap and place on a baking sheet.
3. Place another baking sheet on top of the sandwiches and place something heavy on top to weigh it down (such as a few cans of vegetables or a heavy skillet) and place in the refrigerator for at least 30 minutes. This will help compress the sandwiches
4. Whisk together the eggs and milk in a shallow baking dish and season with salt and pepper. Dip each sandwich in the mixture and turn to coat each side.
5. Heat 1 tablespoon of butter and 1 tablespoon of oil in a large nonstick pan over high heat until it begins to sizzle. Place two sandwiches in the pan at a time and cook until golden brown on both sides and the cheese has melted.
6. Repeat with the remaining butter, oil and sandwiches. Serve immediately or keep warm on a baking sheet in the oven.