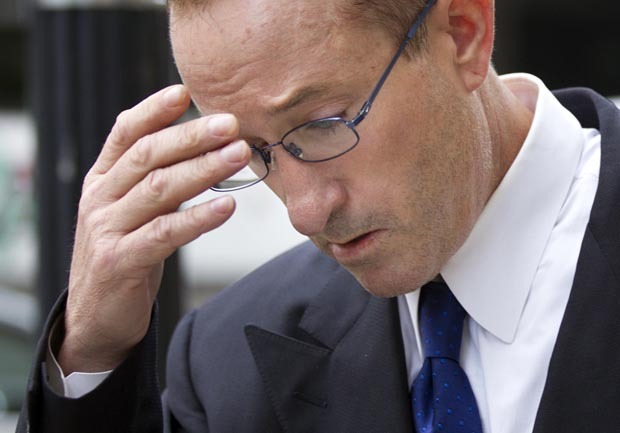 (CBS/AP) WASHINGTON - Roger Clemens' lawyer toyed with Brian McNamee's memory and attacked him from several directions at once. The attorney even put an easel next to the witness with the words: "MISTAKE. BAD MEMORY. LIE." Eventually, there came the inevitable question: "Do you sometimes just make stuff up?"

McNamee has frequently taken long pauses before answering questions in three days on the witness stand, but he didn't hesitate this time. He leaned into the microphone and said softly but assuredly: "I didn't make it up."

Clemens' chief accuser was on the stand for two hours of aggressive cross-examination Wednesday on one of the most important days — perhaps the most important — in the perjury trial of the seven-time Cy Young Award winning pitcher. Clemens is charged with lying when he told Congress in 2008 that he never used steroids or human growth hormone.

McNamee has testified he injected Clemens with both, and the credibility of Clemens' former friend and longtime strength coach will no doubt be the No. 1 topic when the jury starts deliberating the case.

Going for style over substance, Clemens lawyer Rusty Hardin was as colorful as his outfit — bright orange tie, cream-colored suit — and continued his practice of mispronouncing the witness' name as mac-nah-MAY instead of MAC-nah-mee. He skipped from topic to topic without warning, often confusing McNamee while trying to sow seeds of doubt in the jurors' minds.

McNamee, who has now spent 12 hours on the stand with more to come on Thursday, alternated between fidgety and focused. At various times he looked curiously at the courtroom ceiling, draped his arm around his chair, or leaned forward to scratch an itchy foot while Hardin was asking questions. McNamee sometimes seemed perplexed by simple yes-or-no questions and stumbled through an answer about his birthday.

Other times, he was more firm and direct. He complained when Hardin asked him a convoluted, multipart question: "Which one do you want me to answer?" "Pick one," Hardin replied.

Hardin was perhaps most effective when he got McNamee to agree that his memory about events connected to Clemens had improved once McNamee began cooperating with federal investigators looking into steroids and baseball.

"Is it true that ever since you began making these accusations about Mr. Clemens, your memory and versions of what happened and details have sort of evolved?" Hardin asked.

Hardin asked if McNamee had "intentionally lied" to investigators.

"Yes sir," McNamee replied. McNamee testified earlier in the week that he originally minimized Clemens' involvement with performance-enhancing drugs in what he said was an effort to protect the pitcher.

Hardin worked the same angle when McNamee had trouble remembering what was written on the cover of a book McNamee started writing but never published.

"You remember little details all the way back to 1998 ... but you have to have me show you the cover of your book before you know what's on it," Hardin said.

Referencing the easel, Hardin would cite various statements and ask McNamee to put them in the category of "mistake," "bad memory" or "lie." McNamee conceded to one case of a "bad memory" before court adjourned for the day at noon because of a juror's schedule conflict. McNamee returns to the stand Thursday.

McNamee says he gave Clemens injections of performance-enhancing drugs in 1998, 2000 and 2001. During questions about the 1998 injection, Hardin inadvertently introduced evidence he had sought to keep away from the jury.

McNamee testified that he overheard a conversation between teammates Clemens and Jose Canseco about steroids in the Toronto Blue Jays clubhouse, a conversation the judge had ruled could not be brought up by prosecutors.

Having overheard Clemens and Canseco, McNamee said he therefore was certain Clemens was referring to steroids when Clemens later asked for a help with a "booty shot" in early June 2008. Hardin stressed that Clemens didn't use the word "steroids" and could have been referring to a shot for the vitamin B12. McNamee has said he first injected Clemens with steroids later that month.

McNamee also testified for the first time about a conversation he said he had with Clemens about steroids following Clemens' 2003 season with the New York Yankees. McNamee said that Clemens had planned to retire and "wanted to change his workout program and get bigger." McNamee said Clemens asked, "Do you still have that guy?" who can supply the drugs. Clemens eventually decided to keep playing and returned in 2004 with the Houston Astros.

Hardin was incredulous that McNamee didn't relate that conversation to federal investigators or while being interviewed for the 2007 Mitchell Report on performance-enhancing drugs in baseball.

"Bad memory," McNamee said, adding that nothing ever came of the conversation.

Hardin also sought to prove that McNamee had tried to profit from the publicity following the 2008 congressional hearings, again pointing out a tie with the logo of a friend's company that McNamee wore to grand jury testimony and an appearance McNamee made on Howard Stern's radio show.

"Is it true you have been seeking to take advantage of the fame you have achieved by making accusations against Roger Clemens?" Hardin asked.

The government objected to the question, and Hardin withdrew it before McNamee could answer.

The trial is in its fifth week and is danger of losing a third juror to boredom. Prosecutors expressed concern Wednesday as to whether Juror No. 13 has been sleeping during testimony. Two other jurors have been dismissed for sleeping, leaving 12 jurors and two alternates.

The juror would have certainly stayed wide awake if she could've heard the bitter exchange before the jury was brought in for the start of Wednesday's testimony. Clemens lawyer Michael Attanasio was upset that McNamee has repeatedly implied that he gave HGH shots to former Clemens teammate Andy Pettitte, a fact ruled inadmissible by the judge. Attanasio said the McNamee-Pettitte connection was further implied by the way the government had redacted an email exchange between McNamee and Clemens.

"Mr. Hardin will come tackle me if I move for a mistrial, so I won't," Attanasio said angrily. The first attempt to try Clemens last summer ended in a mistrial when prosecutors showed the jury a snippet of videotaped evidence that had been ruled inadmissible.

U.S. District Judge Reggie Walton didn't disagree with Attanasio's point, but he scolded Attanasio for taking such an accusatory tone toward the government over what could just be an honest mistake.

"That's what our political world is now, and it's coming into the court," Walton said.

"You fight hard," the judge added, "but you don't have to throw dirt at each other."