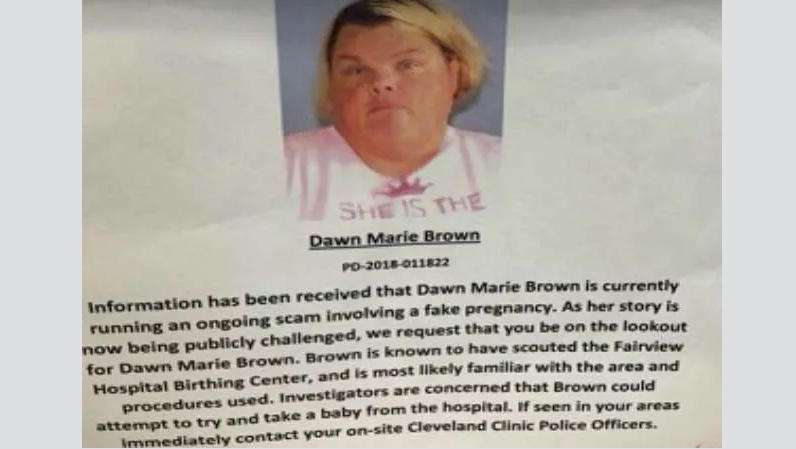 CLEVELAND — Cleveland police have warned a local hospital that a woman under investigation for fundraisers connected to false claims she was pregnant and had cancer might try to take a baby.

Cleveland.com reports the Cleveland Clinic Fairview Hospital outside of Cleveland has posted fliers with Dawn Brown's photo in its maternity ward after receiving a warning from Cleveland police.

The Cleveland Clinic said in a statement Thursday that the hospital is taking "extra measures" to ensure patient safety.

The flier says Brown had scouted Fairview Hospital's birthing center and was familiar with procedures there.

The Cleveland police internal affairs unit is investigating whether he knew his wife had lied about being pregnant or having cancer.

According to CBS affiliate WOIO, Brown allegedly crafted fake social media claims petitioning for life-saving blood transfusions needed to save her nonexistent baby. In one, her husband writes: "Doctor just called. Kassidy Marie, the baby would have a five percent chance of survival if delivered now and my beautiful wife still would have no chance at all."

Her Facebook posts sparked widespread community support, including the rank-and-file in the police department. A blood drive was held at the Union Hall on her behalf.