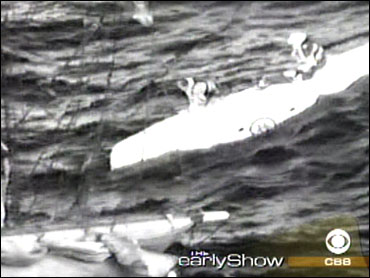 The Atlantic Rowing Race is a grueling 2,900 mile trip from the Canary Islands to Antigua. But Emily Kohl, 23, and Sarah Kessans, 22, thought they were more than ready for the challenge.

The two young women had been preparing for the race for more than two years, since meeting on the rowing team at Perdue University.

But 46 days and 1,666 miles into the race, Kohl and Kessans ran into trouble. Facing high winds and rough seas, they were forced to stop rowing and let the boat drift with the waves and wind.

For 18 hours, the women waited out the storm in the small cabin of their boat. But as oxygen levels began to drop, they opened the vents of the cabin for air. When a huge wave crashed down, water rushed into the vents, capsizing the vessel and forcing the women to scramble for the exit.

Kessans and Kohl were able to climb onto the upside down boat to stay above water and that perch became their home for the next 16 hours, until the Coast Guard tracked them down.

The women are still on the ship that

rescued
them and spoke with The Early Show co-anchor Julie Chen about the adventure that could have cost them their lives.

"Both Emily and I are very determined, very resilient people," Kessans said. "It was touch and go there for a while but we were keeping each other's morale high."

Keeping their spirits up got harder as daylight faded. When darkness fell, so did the temperature and the two women comforted each other by singing songs and telling jokes.

"Had we been rowing solo, doing it by ourselves, it would have been much harder," Kessans told Chen. "But we've been teammates for so long now, we know when the other person is getting down. We know how to bring them back up."

The women called for help using an emergency beacon, but had no way of knowing whether their signal had been received until Coast Guard helicopters appeared above, followed by a 180-foot commercial boat, which pulled them to safety.

Kohl and Kessans have been aboard that boat since Monday morning and expect to arrive in Barbados over the weekend.

"We actually got some good rest last night and good food in our bodies," Kohl said. "We're doing much better than we were a couple of days ago."