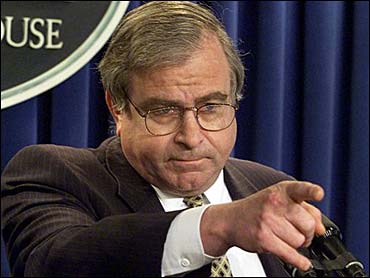 Sandy Berger, who was President Clinton's top national security aide, pleaded guilty Friday to taking classified documents from the National Archives and cutting them up with scissors.

Rather than the "honest mistake" he described last summer, Berger acknowledged to U.S. Magistrate Deborah Robinson that he intentionally took and deliberately destroyed three copies of the same document dealing with terror threats during the 2000 millennium celebration.

"Guilty, your honor," Berger responded when asked how he pleaded.

The charge of unauthorized removal and retention of classified material is a misdemeanor that carries a maximum sentence of a year in prison and up to a $100,000 fine.

However, under a plea agreement that Robinson must accept, Berger would serve no jail time but instead pay a $10,000 fine, surrender his security clearance for three years and cooperate with investigators. Security clearance allows access to classified government materials.

Sentencing was set for July 8.

The court appearance was the culmination of a bizarre episode in which the man who once had access to the government's most sensitive intelligence was accused of sneaking documents out of the Archives, which houses the Constitution, Declaration of Independence and other cherished and top-secret documents.

The Bush administration disclosed the investigation in July, just days before the Sept. 11 commission issued its final report. Democrats claimed the White House was using Berger to deflect attention from the harsh findings, with their potential for damaging President Bush's re-election prospects.

After news of the probe surfaced, Berger acknowledged he left the National Archives on two occasions in 2003 with copies of documents about the government's anti-terror efforts and notes that he took on those documents.

He said he was reviewing the materials to help determine which Clinton administration documents to provide to the independent commission investigating the Sept. 11 attacks. He called the episode "an honest mistake" and denied criminal wrongdoing.

Berger and his lawyer, Lanny Breuer, have said that Berger knowingly removed the handwritten notes by placing them in his jacket and pants and inadvertently took copies of actual classified documents in a leather portfolio.

He returned two of the five copies of a sensitive after-action report on the Clinton administration's handling of al Qaeda terror threats during the December 1999 millennium celebration.

The Associated Press first reported in July that the Justice Department was investigating Berger. The disclosure prompted Berger to step down as an adviser to the campaign of Democratic presidential candidate John Kerry.

Clinton was among Democrats who questioned the timing of the disclosure of the Berger probe, three days before the release of the Sept. 11 report. The commission, reporting three months before the 2004 presidential election, detailed failures of both the Clinton and Bush administrations.

Leaders of the Sept. 11 commission said they were able to get every key document needed to complete their report.