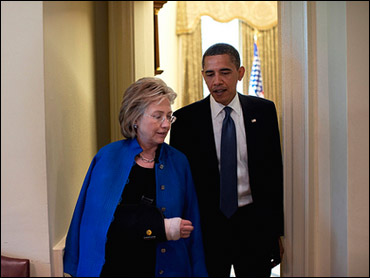 At the end of his trip to Asia, President Obama said getting the new Strategic Arms Reduction Treaty (START) with Russia ratified in the Senate during the lame duck session is a "top priority" of his administration. Today, those efforts were echoed by Hilary Clinton and Robert Gates in an op-ed in the Washington Post.

The secretaries of state and defense urged the Senate to pass the treaty before the end of the year. The slow approval process became an issue during Mr. Obama's talks with Medvedev in Asia over the weekend.

"Time is running out for this Congress," they said in the op-ed.

The treaty would reduce the number of deployed weapons and create more arms and security transparency between the United States and Russia. The cap on the number of nuclear weapons held by each country would decrease from 2,200 to 1,500 warheads, but Gates and Clinton say that won't come at the cost of American security. They also say it would create a better working relationship between the world's two largest nuclear powers.

"It will not limit our ability to develop and deploy the most effective missile defenses to protect America's forces and territory," said Clinton and Gates.

The op-ed also pointed out that past efforts and treaties to receive arms control were passed in the Senate with overwhelming majorities in 1992 and 2003.

Sixty-seven members of the Senate -- or two thirds -- would have to vote for the treaty for it to be ratified.