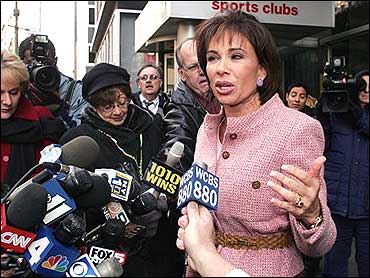 Jeanine Pirro said Friday she is staying in the race against Sen. Hillary Rodham Clinton, despite pressure from some top Republicans that she abandon her struggling campaign.

Speculation that Pirro might quit the race has been running through New York political circles since Tuesday when state Senate Majority Leader Joseph Bruno, the Legislature's top Republican, said she should give up her Senate bid and run instead for state attorney general.

Pirro met with Pataki amid pressure from some top Republicans to give up her quest.

Pirro met with the governor on Friday in his Manhattan office. On Thursday evening, her campaign spokeswoman, Andrea Tantaros, said Pirro had no plans to leave the race.

Some possible big-name alternatives — former New York City Mayor Rudolph Giuliani and Governor Pataki — have already turned down the race. Both are eyeing possible bids for the 2008 GOP presidential nomination.

But neither has generated much support thus far within GOP circles.

The Pirro campaign has struggled since it began on Aug. 8 and has had trouble raising money. The state Conservative Party has balked at her support for abortion and gay rights. No Republican running statewide in New York has won without Conservative Party backing since 1974.

Clinton already had almost $14 million in her campaign account by the end of September and polls have shown her far ahead of Pirro and other potential GOP challengers.