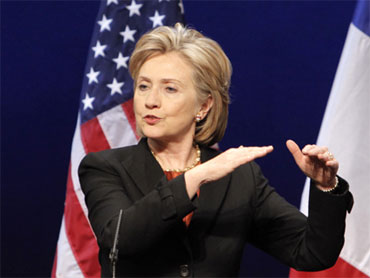 U.S. Secretary of State Hillary Rodham Clinton warned China on Friday it risks diplomatic isolation and disruption to its energy supplies unless it helps keep Iran from developing nuclear weapons.

Speaking in Paris, Clinton said she and others who support additional sanctions on Iran for refusing to prove it has peaceful nuclear intentions are lobbying China to back new U.N. penalties on the Iranian government.

She said she understood China's reluctance to impose new penalties on Iran, its third-largest supplier of oil. But she stressed that a nuclear-armed Iran would destabilize the Persian Gulf and imperil oil shipments China gets from other Arab states in the region.

There is a new push for sanctions at the U.N. because of Iran's continued refusal to engage on the matter with the five permanent members of the Security Council - Britain, China, France, Russia and the United States - and Germany.

Administration officials have invited new talks with Iran, but with no sign that Iran wants to do business, the focus has turned to penalties.

"As we move away from the engagement track, which has not produced the result that some had hoped for, and move forward on the pressure and sanctions track, China will be under a lot of pressure to recognize the destabilizing impact that a nuclear-armed Iran would have in the Gulf, from which they receive a significant percentage of their oil supplies," Clinton said.

The United States is the most visible leader in the new push for U.N. Security Council sanctions, and Clinton spent much of her time in Europe this week lobbying major powers whose support she needs to pass and enforce new economic penalties.

Some of the additional measures that will be proposed target elements of Iran's powerful militia structure, U.S. officials said.

The Obama administration has said Iran appears bent on developing nuclear weapons, although Iran claims its nuclear work is peaceful. Iran is thought to have stockpiled more than enough nuclear material to manufacture a single bomb, and more is being made daily.

The risks of an Iranian bomb are manifold, Clinton said.

"It will produce an arms race," in the Persian Gulf, and Israel will feel its very existence threatened, Clinton said in response to a question from an audience member during a speech at a French military academy. "All of that is incredibly dangerous."

The United States has cautioned Israel publicly against a pre-emptive strike on Iran's known nuclear facilities, arguing that such an attack would invite an arms race and retaliation.

China has traditionally resisted U.N. Security Council sanctions, saying they are counterproductive and harm efforts to persuade Iran to prove its claim that the nuclear program is peaceful.

Clinton met Thursday in London with Chinese Foreign Minister Yang Jiechi to make the case to move ahead with sanctions at the United Nations. U.S. officials said Yang's response was noncommittal.

In Paris, Clinton said her message to the Chinese had been this: "We understand that right now it seems counterproductive to you to sanction a country from which you get so much of the natural resources your growing economy needs. But think about the longer-term implications."
By Associated Press Writer Matthew Lee