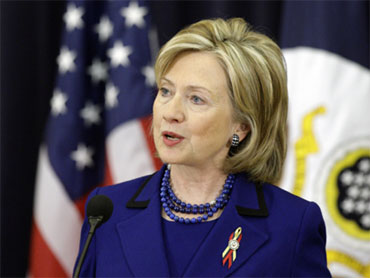 Secretary of State Hillary Rodham Clinton said Tuesday she resents criticism of the U.S. effort to help stricken Haiti and pledged to redouble efforts to help survivors of the Jan. 12 earthquake.

"I deeply resent those who attack our country, the generosity of our people and the leadership of our president in trying to respond to historically disastrous conditions after the earthquake," Clinton said.

"Some of the international press either misunderstood or deliberately misconstrued what was a civilian and military response, both of them necessary in order to be able to deliver aid to the Haitians who desperately needed it," Clinton told a gathering of State Department employees.

"I have absolutely no argument with anyone launching a legitimate criticism against our country," she said. "I think we can learn from that, and we are foolish if we keep our head in the sand and pretend that we can't."

She was not more specific about the source of the criticism.

Last weekend, the aid group Doctors Without Borders complained of skewed priorities and a supply bottleneck at the airport in Port-au-Prince amid reports that U.S. military flights were getting priority.

French, Brazilian and other officials complained about the airport's refusal to let their aid planes land, forcing many flights to end up in the neighboring Dominican Republic, a day's drive away.

On Sunday, Italy's civil protection chief blasted the U.S. military intervention as inefficient and out of touch with reality on the ground. In an interview with state-run RAI television, Guido Bertolaso said the overall relief effort was a "pathetic" failure, and he called for the appointment of an international civilian humanitarian coordinator. The criticism was unusual from Italy, a close European ally of the United States.

Complete Coverage: The Road to Recovery in Haiti
Haiti Quake: How You Can Help

In addition, French Cooperation Minister Alain Joyandet urged the United Nations to investigate the dominant U.S. role in the relief operation, arguing that international aid efforts were supposed to be helping Haiti, not "occupying" it.

Clinton dismissed the Italian criticism Monday, saying during a news conference with Italy's Foreign Minister Franco Frattini in Washington that a massive humanitarian response could not succeed without military involvement.

Haitians have complained that food, medicine and water have been woefully slow in reaching them.

The U.S. military envisions being able to start handing off its mission in Haiti to international organizations in three to six months, senior defense officials said Tuesday.

"That three-to-six-month time frame is certainly a good logistics planning window, but the U.S. military is committed to being there as long as we're needed," said John Kirby, spokesman for the U.S. military's Joint Chiefs of Staff.

Lt. Gen. Ken Keen, the military deputy commander at U.S. Southern Command, said the precise timing of the military's departure from Haiti will depend upon the ability of USAID and other organizations to ramp up operations.