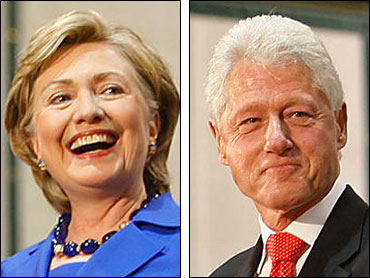 Former President Bill Clinton's foundation has raised at least $41 million from Saudi Arabia and other foreign governments that his wife Hillary Rodham Clinton may end up negotiating with as the next secretary of state.

The Kingdom of Saudi Arabia gave $10 million to $25 million to the William J. Clinton Foundation, a nonprofit created by the former president to finance his library in Little Rock, Ark., and charitable efforts to reduce poverty and treat AIDS. Other foreign government givers include Norway, Kuwait, Qatar, Brunei, Oman, Italy and Jamaica.

Buried among the names of Saudi royals and super-rich businesses are thousands of people who gave to victims of Hurricane Katrina, reports CBS News correspondent Sharyl Attkisson.

Katrina donors ended up on the list of Clinton supporters when donations poured in before the Bush-Clinton Katrina Fund was fully set up, so the former presidents held the money in two other charities: the Greater Houston Community Foundation and the Clinton Foundation.

Four months after the hurricane, the Houston Charity passed more than $50 million dollars onto the national Katrina Fund, Attkisson reports. A month after that, in January and February of '06, the Clinton Foundation gave about $30 million.

That pit stop in the Clinton fund officially turned those Katrina donors into Clinton donors--people who expected their money to go directly to hurricane relief.And just two weeks ago, thousands of them got letters saying their names were about to be made public.

Among those "surprised" to find themselves on today's list was former Congressman Rob Portman, a Republican on Bush's cabinet at the time.

"These are folks who saw the tragedies of Katrina and wanted to donate," said Dean Zerbe, who was the lead investigator of charities for Congress. "How they've gotten themselves wrapped up into having their names put on a web site is beyond me."

The foundation disclosed the names of its 205,000 donors on a Web site Thursday, ending a decade of resistance to identifying the sources of its money. While the list is heavy with international business leaders and billionaires, some 12,000 donors gave $10 or less.

Clinton agreed to release the information after concerns emerged that his extensive international fundraising and business deals could conflict with America's interests if his wife became President-elect Barack Obama's top diplomat. The foundation has insisted for years it is under no legal obligation to identify its contributors, contending that many expected confidentiality when they donated.

The list also underscores ties between the Clintons and India, a connection that could complicate diplomatic perceptions of whether Hillary Clinton can be a neutral broker between India and neighbor Pakistan in a region where Mr. Obama will face an early test of his foreign policy leadership.

The former president did not release specific totals for each donor, providing only ranges of giving. Nor did he identify individual contributors' occupations or countries of residence.

Donors gave Clinton's foundation at least $492 million from its inception in 1997 through last year, the most recent figures available.

After negotiations with Mr. Obama's transition team, Clinton promised to reveal the contributors, submit future foundation activities and paid speeches to an ethics review, step away from the day-to-day operation of his annual charitable conference and inform the State Department about new sources of income and speeches.

Representatives of the foundation, including CEO Bruce Lindsay and attorney Cheryl Mills, met privately Wednesday with aides to incoming Foreign Relations Committee Chairman John Kerry of Massachusetts and ranking Republican Dick Lugar of Indiana to discuss the foundation's activities and review a memorandum of understanding drawn up by the Clinton and Obama teams.

The Foreign Relations Committee will hold hearings and vote on Hillary Clinton's nomination before sending it to the full Senate. Shortly after Mr. Obama tapped Clinton, Lugar said he would support her, though he said there would still be "legitimate questions" raised about the former president's extensive international involvement.

"I don't know how, given all of our ethics standards now, anyone quite measures up to this - who has such cosmic ties," Lugar said.

Some of the donors have extensive ties to Indian interests that could prove troubling to Pakistan. Tensions between the two nuclear nations are high since last month's deadly terrorist attacks in Mumbai.

Amar Singh, a donor in the $1 million to $5 million category, is an Indian politician who played host to Bill Clinton on a visit to India in 2005 and met Hillary Clinton in New York in September to discuss an India-U.S. civil nuclear agreement.

Also in that giving category was Suzlon Energy Ltd. of Amsterdam, a leading supplier of wind turbines. Its chairman is Tulsi R. Tanti, one of India's wealthiest executives. Tanti announced plans at Clinton's Global Initiative meeting earlier this year for a $5 billion project to develop environmentally friendly power generation in India and China.