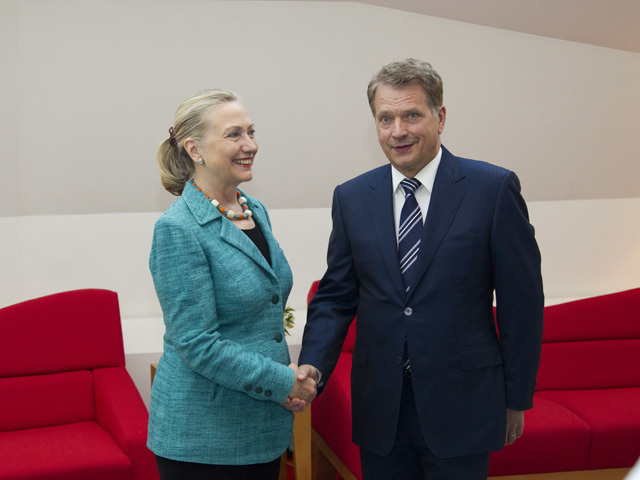 Annan "has developed his own very concrete road map for political transition" from the Assad regime, Clinton said at a news conference at the start of her three-country European tour. "We believe it embodies the principles needed for any political transition in Syria that could lead to a peaceful, democratic and representative outcome reflecting the will of the Syrian people."

The violence in Syria has worsened since a cease-fire deal in April, and the bloodshed appears to be taking on more dangerous, sectarian overtones, the U.N. said Wednesday. The U.N.'s deputy envoy for Syria, Jean-Marie Guehenno, told the U.N. Human Rights Council that the violence in Syria has "reached or even surpassed" levels seen before the April 12 ceasefire agreement and that Annan's six-point peace plan "is clearly not being implemented."

Reflecting the sense of urgency, Annan has summoned permanent members of the U.N. Security Council for a conference on Syria in Geneva on Saturday but has not invited Iran or Saudi Arabia, two of the biggest regional players. Annan's announcement cited invitations to the five veto-wielding council members -- Britain, China, France, Russia and the United States -- plus Turkey. Clinton spokesman Philippe Reines said Clinton plans to attend the meeting.

"The objectives of the Action Group for Syria are to identify steps and measures to secure full implementation of the six-point plan and Security Council resolutions 2042 and 2043, including an immediate cessation of violence in all its forms," said Annan in a statement. "The Action Group for Syria should also agree on guidelines and principles for a Syrian-led political transition that meets the legitimate aspirations of the Syrian people; and agree on actions that will make these objectives a reality on the ground.

"I look forward to a productive meeting this weekend, where we can all agree on concrete actions to end the cycle of violence and bring peace and stability to the Syrian people."

Clinton said she has "great hope" the Geneva meeting can be "a turning point" for the Syria conflict if Russia and China agree to support the Annan plan.

Syrian President Bashar Assad "has relied on the support of Russia and China in the Security Council to prevent the international community from taking unified action," Clinton said.

"If Kofi Annan is able to lay down a political transition road map that is endorsed by countries including Russia and China, for example, that sends a very different message," Clinton said. "That's the first time the international community will have really evidenced a direction that I think Assad will have to respond to."

"If he is able to get people there who up until now have either been on the sidelines or actively supporting or protecting the Assad regime, then that gives heart to the opposition. It also disheartens a lot of the regime insiders," she said.

Russia, which along with China has twice protected Assad's regime from U.N. sanctions and continued to provide it weapons, has argued that the West should raise pressure on the Syrian opposition to sit down for talks with the government. Moscow has argued that the Syrians themselves must determine the country's future and warned that it would firmly oppose any document urging Assad to step down.

Russian Foreign Minister Sergey Lavrov has said that the Geneva meeting "should be aimed at mobilizing resources that foreign players have to create conditions needed to start an all-Syrian political process, not to predetermine its direction." He warned against using the conference to "justify any future unilateral actions."

On other issues, Clinton said the Obama administration is pleased so far with commitments made by Egypt's Islamist president-elect, Mohammed Morsi, but will reserve judgment on his government until it is up and running. She said the U.S. was pleased that the new leader has pledged to respect Egypt's international obligations, which Washington believes covers its 1979 peace treaty with Israel. She also said the Egyptian military, which is supposed to turn over power to the president on Saturday, deserved praise for "facilitating" a free, fair and credible election.

She also told reporters she is optimistic that relations with Moscow will not suffer despite planned legislation in Congress that would impose tough sanctions on Russian human rights violators.