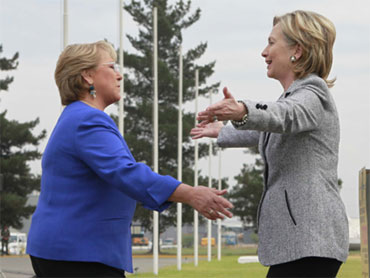 U.S. Secretary of State Hillary Rodham Clinton arrived in earthquake-ravaged Chile on Tuesday to offer the devastated country moral and material support as it recovers from the deadly disaster.

Clinton flew into the capital of Santiago, delivering much-needed communication equipment and a technician. It's a first installment of what she says will be substantial U.S. relief assistance.

"We brought some satellite phones," Clinton told Chilean President Michelle Bachelet in a picture-taking session. "That was the one thing we could get on the plane right away."

State Department spokesman P.J. Crowley said in Washington on Monday that Chile has also asked for a field hospital and water purification systems. Other details of U.S. aid are to be worked out during Clinton's visit.

U.S. officials said Chile would not have to repay any U.S. assistance.

Clintonb's Santiago visit was expected to be confined to the airport and its immediate vicinity, meeting with outgoing Chilean President Michelle Bachelet and President-elect Sebastian Pinera.

Little destruction was visible from the air as Clinton's plane descended. At the airport itself, pallets of various types of assistance were stacked in front of some hangars, and one military transport plane landed shortly after Clinton's U.S. Air Force jet.

Argentina on Monday flew in an Air Force C-130 with much of a hospital - including a surgical and intensive care unit, ambulance and laboratory - three water treatment plants and power generation units, the military announced.

Five other planeloads of aid were supposed to arrive by Tuesday night.

Peru, too, said it was sending in a hospital and doctors with 15 tons of blankets and tents.

Before the weekend quake struck, Clinton had planned a longer stay in Chile, but she will now only spend a few hours there before heading to Brazil. Clinton is in the midst of a weeklong, six-nation tour of Latin America that has taken her already to Uruguay and Argentina.

Santiago is the second major earthquake zone Clinton has visited in the past two months. Four days after Haiti was hit with a devastating temblor in January, she was on the ground at the Port-au-Prince airport, meeting with Haitian officials and assessing damage with disaster relief experts.

In addition, since she has been secretary of state, Clinton has also been traveling abroad and present in at least three foreign countries - Honduras, Japan and Pakistan - when they have been struck by quakes or strong aftershocks.