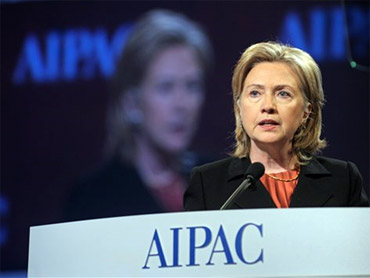 In a speech to the American Israel Public Affairs Committee, Clinton said that Israel's recent announcement of new housing in east Jerusalem exposed differences between the U.S. and the Jewish state that others could exploit. She defended the Obama administration's strong criticism of the move because she said it hurt attempts to launch indirect peace talks.

"We objected to this announcement because we are committed to Israel and its security, which we believe depends on a comprehensive peace," Clinton said.

Clinton got a polite but muted response to most of her remarks, and loud approval when she talked tough on Iran.

The secretary vowed that the Obama administration will not accept a nuclear armed Iran and is working on sanctions "that will bite" to press it to come clean about its suspect atomic program.

Clinton said parts of Iran's government are "a menace" to the Iranian people and the Middle East. Israel considers Iran a mortal threat in its back yard, especially since the development of better Iranian missiles and the advancement of Iran's nuclear program to the point where a weapon could be feasible.

Iran claims it is not building a weapon.

Clinton said Iran's leaders must know there are "real consequences" for not proving their nuclear activities are peaceful.

"Our aim is not incremental sanctions, but sanctions that will bite," Clinton told the group.

Clinton said that if Iran developed a nuclear weapon, it would embolden terrorists and spark an arms race that would destabilize the Middle East.

Clinton assured Israel that the U.S. administration's commitment to its security and future is "rock solid" despite the division over the continued expansion of Jewish housing. Palestinians claim that the expansion is a land grab that will be impossible to roll back, leaving them less space and less desirable outlines for a future state alongside Israel.

"New construction in east Jerusalem or the West Bank undermines mutual trust and endangers the proximity talks that are the first step toward the full negotiations that both sides want and need," she said.

"It exposes daylight between Israel and the United States that others in the region hope to exploit," and undermines what she called an essential U.S. role as mediator. "Our credibility in this process depends in part on our willingness to praise both sides when they are courageous, and when we don't agree, to say so, and say so unequivocally," Clinton said.

The Israeli announcement came while Vice President Joe Biden was visiting the country. It embarrassed Biden, usually a staunch supporter of Israel, and led to one of the worst-ever crises between Washington and its top Mideast ally.

Clinton said talks with Netanyahu on steps Israel can take to restore confidence were under way.

Netanyahu has outlined some steps his government is willing to take, but he said on Sunday that Israel would not halt construction in Jewish neighborhoods in east Jerusalem.

Some Israeli officials say that while there will be no formal freeze, construction in Jewish neighborhoods in east Jerusalem may be restricted, like Netanyahu's partial 10-month West Bank construction freeze.

The package has not been made public, but officials say another element is agreement to discuss all outstanding issues in the proximity talks that Mitchell is to mediate. Those would include the future of Jerusalem, borders, Jewish settlements and Palestinian refugees.

Netanyahu, who will meet privately with Clinton later Monday, is due to meet President Barack Obama on Tuesday.

"Jerusalem is not a settlement," said AIPAC executive director Howard Kohr, pausing for a loud standing ovation from the crowd before Clinton spoke. "Jerusalem is the capital of Israel."

Compromise over Jerusalem will be key to peace. Israel captured the city's eastern sector from Jordan during the 1967 Middle East war and annexed it, a move not recognized by any other country. Over four decades, Israel has built a string of Jewish neighborhoods around the Arab section of the city.

Most Israelis consider them part of the Jewish state, but Palestinians equate them to West Bank settlements, considered illegal under international law.

Kohr also drew loud applause when he urged that disagreements between the allies be settled privately.