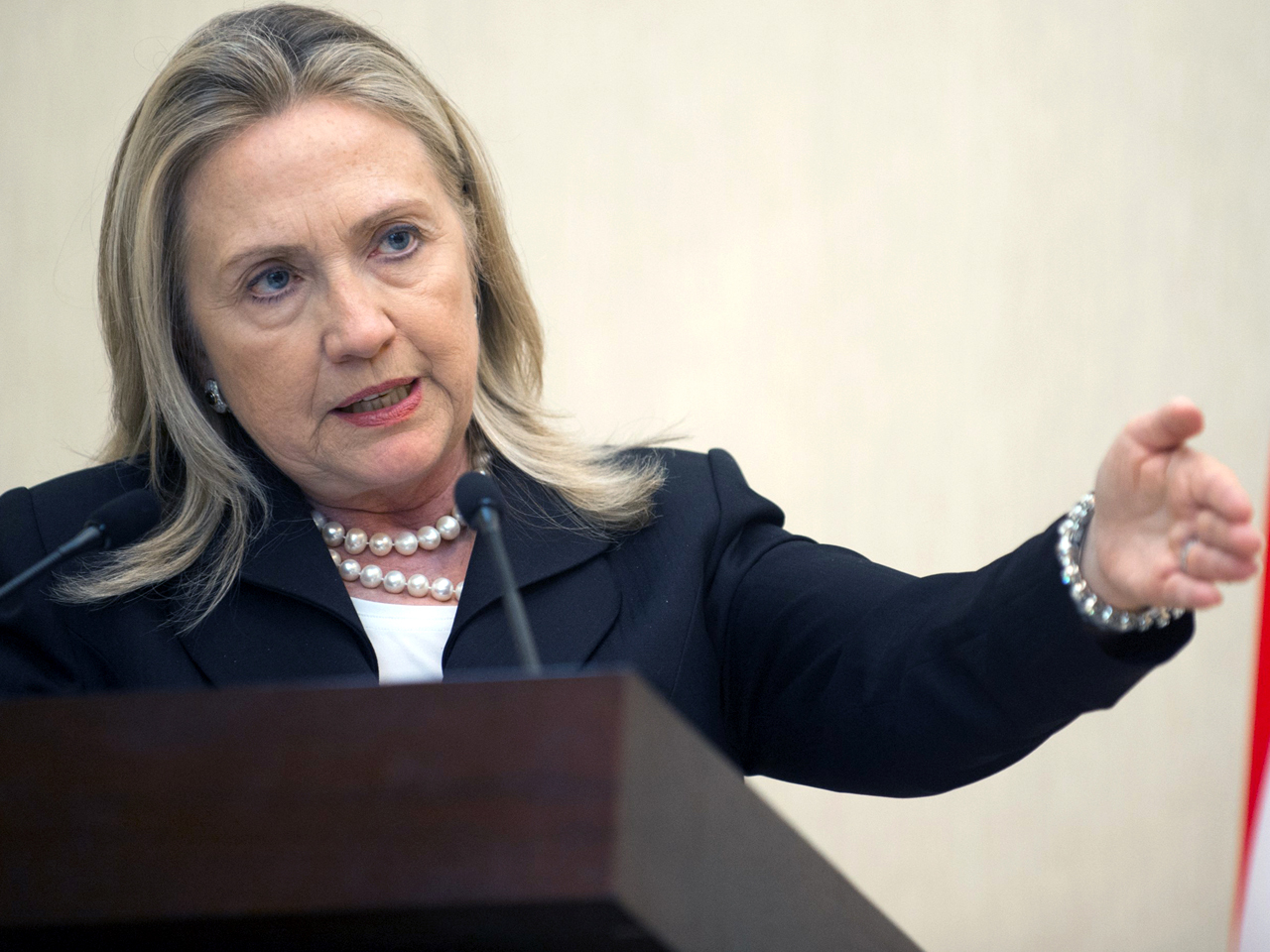 Providing the first U.S. reaction to what Syrian opposition groups were describing Wednesday as a new massacre, Clinton said, "We're disgusted by what we see happening."

"The regime-sponsored violence that we witnessed again in Hama yesterday is simply unconscionable," she said. "Assad has doubled down on his brutality and duplicity, and Syria will not, cannot be peaceful, stable or certainly democratic until Assad goes."

One organization claimed pro-government militiamen killed at least 78, including women and children, in the central Hama province, with some stabbed to death and others burned. The exact death toll and circumstances remain impossible to confirm. Syria rejected the claims as "absolutely baseless," blaming armed terrorists for what it described as a smaller attack.

The violence in Syria has grown increasingly chaotic in recent months, and it is difficult to assign blame for much of the bloodshed. The government restricts journalists from moving freely, making it nearly impossible to independently verify accounts from either side. The opposition blames government forces and militias that support them known as shabihas while the government blames rebels and "armed terrorist groups."

Whatever the truth, Palmer reports the killings are bound to play into the debate later Thursday at the United Nations, when U.N. mediator Kofi Annan will try to convince the world that his peace plan for Syria is not a lost cause.

Some 13,000 people have been killed in 15 months of violence, according to opposition groups.

Speaking in Turkey after meeting foreign ministers and senior envoys from 16 European, Turkish and Arab partners, Clinton outlined a set of principles that she said must guide the world in trying to solve the crisis. Foremost among them, it seemed, was Assad's eventual ouster — and departure from Syria.

The demand appeared to lay down a red line as Washington and its allies seek to broaden diplomatic efforts and win Russian and Chinese support for a structured end to the four-decade Assad regime.

But with neither Moscow nor Beijing present at the closed-door meeting in Turkey late Wednesday, and both remaining hostile to the idea of global sanctions against the Syrian government or any Libya-style military intervention, prospects for a breakthrough were unclear.

At the U.N., Annan will present the United Nations with a plan for creating a "contact group" whose final proposal must be acceptable to Syria's allies Russia and China, which have blocked all U.N. action, as well as the U.S. and its European allies, who insist that Assad must go, U.N. diplomats said. Meetings could also take place on the sidelines of this month's meeting in Mexico of leading rich and developing nations, including a possible tete-a-tete between President Obama and Russian President Vladimir Putin.

Clinton acknowledged that the U.S. and its partners haven't been successful yet in bringing through the kind of international action to end the violence. But she urged nations to remain united.

"We have to do more to help organize and focus the opposition," she said and called on the anti-Assad forces to do more themselves to coalesce around the idea of a democratic, representative and inclusive post-Assad future.

She said she was sending a senior envoy, Fred Hof, to Moscow on Thursday for talks with the Russian government, and she'll meet with Annan on Friday. Russia and China have twice blocked U.N. sanctions against Syria and vowed this week during a meeting between Putin and Chinese President Hu Jintao to oppose any regime change for the country.

Clinton also attended a counterterrrorism conference in Istanbul, pledging $15 million in assistance for transition countries seeking to improve their criminal justice sectors and rehabilitate and reintegrate violent extremists in prisons.

Diplomats are increasingly concerned that the country is spiraling toward civil war.

Annan will give his latest assessment of the Syrian conflict at an open meeting of the U.N. General Assembly on Thursday morning along with U.N. Secretary-General Ban Ki-moon, Arab League chief Nabil Elaraby, and a representative of U.N. human rights chief Navi Pillay. Annan will then brief the U.N. Security Council behind closed doors Thursday afternoon and have dinner with ambassadors from the council's five permanent nations — the U.S., Russia, China, Britain and France, a council diplomat said.

Reports by Syrian activists of a surge of bloodshed in the central Hama province late Wednesday are bound to reinforce the growing belief that Annan's six-point peace plan is unraveling.

The violence comes on the heels of a horrific massacre on May 25 and 26 in Houla, a cluster of villages in the central Homs province, which left over 100 dead including many women and children gunned down in their homes. U.N. investigators blamed pro-government gunmen for at least some of the killings but the Syrian regime denied responsibility and blamed rebels for the attacks.

U.S. Ambassador Susan Rice warned last week that the worst but most probable scenario in Syria is a failure of Annan's peace plan and a spreading conflict that creates "a major crisis" not only in Syria but also region-wide. To avoid this, Rice urged Syria to implement the plan and if it doesn't she said the Security Council should set aside its differences and increase the pressure on Syria with sanctions.

U.S. Treasury Secretary Timothy Geithner followed up Wednesday, warning Syria that U.N. sanctions may be near and calling for the world to exert "maximum financial pressure" on Assad's government.

Russia and China, however, who have vetoed two resolutions threatening possible sanctions, issued a joint statement after a summit in Beijing reiterating their opposition to any outside military interference or forceful imposition of "regime change" in Syria. The statement also indicated opposition to U.N. sanctions.

Russia's Foreign Minister Sergey Lavrov told reporters in Beijing on Wednesday that Moscow is proposing an international conference on Syria to try to persuade all Syrian opposition groups to respect Annan's plan, end all violence and sit down for talks.

"Russia considers it essential to fulfill Kofi Annan's peace plan along with the U.N. Security Council resolution that approved this plan," Lavrov said in remarks posted on the Russian Foreign Ministry's website.

"We believe that it's necessary to convene a meeting of the countries which have a real influence with various opposition groups" including the permanent members of the U.N. Security Council, Turkey, Iran, the Arab League, the Organization of Islamic Cooperation and the European Union, he said.