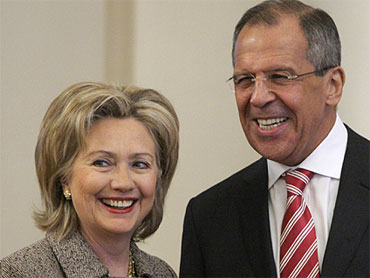 At the same time, she said Moscow and Washington have made "substantial progress" on negotiating a replacement pact to an expired strategic nuclear arms reduction treaty

Clinton spoke in Moscow during a two-day visit for talks on a range of international issues, after a one-on-one meeting with her Russian counterpart, Sergey Lavrov.

Clinton made the statement on Iran when asked about Russian Prime Minister Vladimir Putin's statement that Iran's first nuclear reactor is set to be launched this summer.

Clinton said Iran is entitled to civil atomic energy, but added that it would be premature to go forward with any nuclear project when Tehran has yet to prove the peaceful nature of its program.

The U.S. and other nations are concerned that Iran has been trying to secretly develop nuclear weapons.

Russian Foreign Minister Sergey Lavrov responded that Russia still intends to launch the plant in the Iranian port city of Bushehr. Both spoke after their talks in Moscow.

Meanwhile, Clinton touted progress in talks on nuclear arms reduction. The long-awaited replacement to the Strategic Arms Reduction Treaty - which expired Dec. 5 - is a pillar of the so-called reset in relations between the Cold War foes.

President Barack Obama and his Russian counterpart, Dmitry Medvedev, called for a quick signing at their Moscow summit in July, but negotiations stalled over such issues as counting methods, verification procedures and U.S. plans for a missile defense system in Europe.

Teams of negotiators from both countries have been hammering out a new pact over the last months in Switzerland.

"We are making substantial progress on the new START treaty. The word from our negotiators in Geneva and the results from the latest negotiating rounds lead us to believe we will be reaching a final agreement soon."

Some observers say Russia and the U.S. want a deal reached before nonproliferation conferences in the United States in April and May.

Lavrov said there was every reason to believe "we have entered the final straight."

Clinton was to take part in a meeting of the so-called Quartet of Mideast peacemakers set to hold formal talks on Friday, and is also to see Prime Minister Vladimir Putin in a previously unannounced schedule change.

The Quartet meeting was intended to lend support for the start this week of indirect talks between the Israelis and Palestinians. But those talks fell apart before they began - a casualty of Israel's provocative approval of new housing in east Jerusalem.

The diplomatic crisis erupted last Tuesday, when Israel announced during a visit by Vice President Joe Biden that it would build 1,600 apartments for Jews in disputed east Jerusalem, the sector of the holy city that the Palestinians claim for a future capital. Clinton called the announcement an insult and "a deeply negative signal" for the peace process; she even questioned Israel's commitment to its relationship with the U.S.

Meanwhile, a rocket fired from the Palestinian territory the Gaza Strip on Thursday killed a farm worker in southern Israel, the first such death since Israel waged a brutal war on Gaza just over a year ago.

Clinton's spokesman, P.J. Crowley, said she was awaiting a phone call from Israeli Prime Minister Benjamin Netanyahu for clarification on how the Israeli government intends to respond to a U.S. call for rescinding the east Jerusalem housing decision and to make a gesture of renewed commitment to engaging seriously with the Palestinians in peace talks.

In an op-ed published Thursday in The New York Times, Israeli Ambassador to the U.S. Michael Oren reasserted his government's opposition to any restrictions on building in east Jerusalem. But he denied that U.S.-Israel relations were "at a historic low point" because of the dispute.

"Because we share fundamental values - democracy, respect for individual rights and the rule of law - our friendship can sustain occasional disagreements, and remain unassailably solid," Oren wrote.