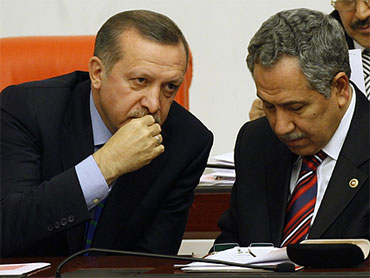 U.S. Secretary of State Hillary Rodham Clinton kicked off a long-planned tour of Latin America Monday aimed at shoring up support in the region for America's foreign policy agenda. But the earthquake disaster in Chile provided a sobering backdrop for the trip.

Clinton said Monday the United States is ready to work "in solidarity" with the leaders of Chile to provide disaster assistance to the earthquake-stricken country.

Speaking to reporters while traveling in Montevideo, Uruguay, Clinton said the Chileans had asked for communications equipment and said she'll be bringing some with her when she travels to Santiago Tuesday.

Clinton said more likely will come after that, saying that "one of the reasons they have asked me to continue my trip is to assess whatever else they might need and immediately begin the process of providing it."

In Uruguay, Clinton met with Jose Mujica, the latest leftist president to be elected to a Latin American country.

Troops from Uruguay are regularly among U.N. peacekeeping forces deployed around the world, and Clinton is hoping to persuade Mujica, a former guerrilla leader to continue the support.

U.S. officials said Clinton has no plans for separate meetings with other inauguration guests, such as Venezuela's President Hugo Chavez, Ecuador's Rafael Correa or Bolivia's Evo Morales. Later Monday she will meet with Argentine President Christina Fernandez in Buenos Aires.

Clinton offered to help Argentina and Britain resolve a festering dispute over a vast swath of the southern Atlantic Ocean where Britain has begun drilling for oil.

Clinton said the two countries should agree themselves over the sovereignty of the British-administered Falkland Islands, where the two nations fought a brief war in 1982.

Clinton said the United States is willing to be a go-between, although she did not specify how such mediation or other help might come about. The islands are claimed by Argentina, which refers to them as Las Malvinas.

"It is our position that this is a matter to be resolved between the United Kingdom and Argentina," she told reporters after meeting Uruguay's new president. "If we can be of any help in facilitating such an effort, we stand ready to do that."

Argentina was a last-minute addition to the itinerary because the situation in Chile prevented her from spending Monday night in Santiago.

Clinton had planned to see Fernandez in Montevideo, where they both attended Mujica's inauguration. There had been grumbling in Argentina that Clinton's failure to visit Buenos Aires was a snub.

After her brief stop in Santiago, Clinton heads to Brasilia, Brazil, for talks with President Luiz Inacio Lula da Silva, whose support the U.S. is seeking for a new round of U.N. Security Council penalties against Iran over its nuclear program.

In Costa Rica on Thursday, Clinton will attend a meeting of regional foreign ministers that will focus on improving economic conditions in the hemisphere. She expects to see outgoing President Oscar Arias, who brokered an accord that ended the political crisis in Honduras last year.

Clinton will also meet with incoming Costa Rican President Laura Chinchilla before wrapping up her tour in Guatemala on Friday.

In Guatemala, Clinton will meet a group of Central American leaders, including Honduran President Porfirio Lobo, who took over in late January from an interim government that had ousted leader Manuel Zelaya in a coup last June.