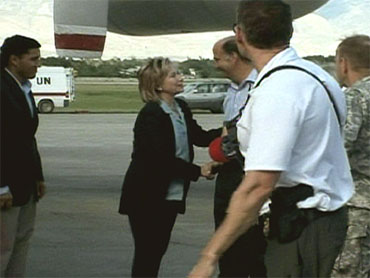 She met with Haitian President Rene Preval, and expressed her sympathies to the Haitian people. Sec. Clinton assured the Haitians gathered at the airport that the U.S. is a "friend, partner and supporter," and will work with President Preval's government to provide humanitarian assistance.

She said the U.S. would focus with the Haitian government on communication, electricity and transportation issues, and the two parties agreed to coordinate together to achieve goals. She reiterated President Obama's commitment to be in Haiti "today, tomorrow and in the future."

A joint communiqué will be issued tomorrow spelling out the cooperation between the two governments.

Clinton is traveling with Dr. Rajiv Shah, administrator of the United States Agency for International Development (USAID). They will meet with Haitian President Rene Preval and other members of the Haitian government, as well as U.S. civilian and military leaders guiding the relief efforts from Haiti.

Clinton flew on board a U.S. Air Force C-130 transport plane from the Coast Guard Air Station Borinquen in Puerto Rico to Port-au-Prince. She brought with her supplies for the 140 staff members of the U.S. Embassy. Fifty American citizens will return with her when she departs Haiti.

Shah, who said the World Food Program has identified 14 distribution sites throughout Port-au-Prince, and has already cleared some roads to facilitate the distribution of supplies. "We're looking to expand that," Shah said.

He said the U.S. military is prepared to provide security and logistics for these distribution sites.

Speaking to reporters on the flight to Port-au-Prince, Clinton said the U.S. will support, but not supplant the Brazilian-led U.N. Mission in Haiti (or MINUSTAH), which she said has primary responsibility for security.

"They (MINUSTAH) have been there for years," she said.

Secretary Clinton talks to the Haitian people and President Preval:

Clinton says the Haitian government has given the U.S. government and others some leeway to meet emergency needs. "The government says the highest priority is to save lives," she said.

However, she said it would be helpful if the Haitian Parliament issued an emergency decree allowing it to delegate certain authority - such as to impose curfews - to others.

When reporters asked if officials were anticipating a major health crisis, such as outbreaks of diseases, Clinton said, "In any disaster like this, you have to plan for the worst eventuality."

She was asked about a timetable for a functioning government? "It's yesterday. But we have to be realistic."

Assistant Secretary P.J. Crowley said that there were hopes to make Cap Haitien operational as a container port, which would give the country a second port.

Shah said three sets of water purification systems, around half the size of a trailer, have been flown to Haiti from Miami; they can produce 100,000 liters of clean water per day. There are plans to send another six such systems from Dubai and Latin America.