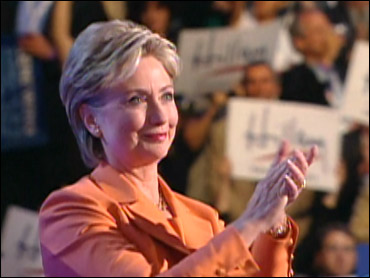 Clinton lent the money to her campaign in several installments last spring as she fought Barack Obama for the Democratic presidential nomination, which she ultimately lost.

The former first lady and New York senator has been working to pay down the debt to clear the way for confirmation as President-elect Obama's secretary of state. Federal ethics rules prohibit Cabinet officials from actively soliciting campaign contributions.

Since suspending her campaign last June, Clinton has told donors she would absorb the personal loan and would not be raising money to pay it down. The campaign's latest FEC report, filed Dec. 20, was the first to reflect that she had formally forgiven the loan.

The new report showed the campaign still owes $6.3 million to vendors, down from about $7.4 million in November. The largest obligation, $5.3 million, is owed to the polling firm of Clinton's senior strategist, Mark Penn.

Clinton was able to write off the loan because she and her husband, former President Bill Clinton, have amassed significant wealth since leaving the White House. The couple has reported earnings of $109 million during the period, mostly from Bill Clinton's paid speeches.

The Clintons also have taken several steps to clear the way for the senator to become secretary of state. Last week, under an agreement with the Obama transition team, Bill Clinton released the names of 205,000 donors to his presidential foundation. The former president had insisted for years that the names not be published, saying many donors had agreed to give money on the condition of confidentiality.