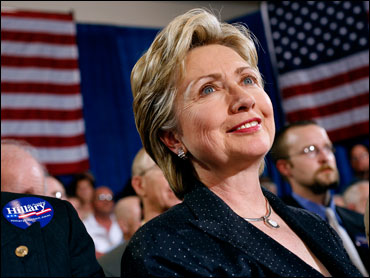 This column was written by Robert Scheer.

What in the world was Sen. Hillary Clinton thinking when she attacked Sen. Barack Obama for ruling out the use of nuclear weapons in going after Osama bin Laden? And why aren't her supporters more concerned about yet another egregious example of Clinton's consistent backing for the mindless militarism that is dragging this nation to ruin? So what that she is pro-choice and a woman if the price of proving her capacity to be commander in chief is that we end up with an American version of Margaret Thatcher?

In response to the 9/11 hijackers, armed with weapons no more sophisticated than $3 box cutters, American military spending, with Senate Armed Services Committee member Clinton's enthusiastic support, has catapulted beyond cold war levels. Senator Clinton has treated the military budget as primarily a pork-barrel target of opportunity for jobs and profit in New York state, supports increased money for missile defense and every other racket the military-industrial complex comes up with, and still feels no obligation to repudiate her vote for the disastrous Iraq war.

Given her sorry record of cheerleading the irrational post-cold war military buildup, do we not have a right, indeed an obligation, to question whether Clinton is committed to creating a more peaceful world? Don't say that we weren't warned if a President Hillary Clinton further imperils our world, as she has clearly positioned herself as the leading hawk in the Democratic field. What other reason was there for first blasting Obama for daring to state that he would meet with foreign leaders whom Bush has branded as sworn enemies, and then for the attack on Obama's very sensible statement that it would be "a profound mistake" to use nuclear weapons in Pakistan and Afghanistan in the attempt to eliminate bin Laden?

Isn't that a no-brainer — or can Clinton conceive of an occasion where even the threat, let alone the actuality, of a nuclear attack in the immediate neighborhood of nuclear-armed Pakistan and India would send the right message? And what about the dangerous message of Clinton's assault on Obama: "I don't believe that any President should make any blanket statements with respect to the use or non-use of nuclear weapons." Huh? Just exactly how does one make a compelling case to other nations against the proliferation of nuclear weapons when members of the nuke club, particularly the President of the one nation that has killed hundreds of thousands of people with two of these ungodly weapons, will not, at the very least, promise to abstain from first use of a weapon that could quite easily eliminate most life on this planet?

Of course Obama was right, and it was no different than Senator Clinton's statement in April 2006, when she said, "I would certainly take nuclear weapons off the table," in relation to preventing Iran from developing such weapons. Back then, she recognized that nuclear weapons are weapons against civilization, not a means of ensuring its survival. "This Administration has been very willing to talk about using nuclear weapons in a way we haven't seen since the dawn of a nuclear age," she said. "I think that's a terrible mistake." Yes, indeed — and Hillary's supporters will no doubt insist that this statement reflects her true feelings on the matter and that "militarist Hillary" is just an act to get elected.

Act or reality, it's working. Pundits for the National Review, The Weekly Standard and other pro-war outlets have come to applaud Clinton. A host of political scientists and other campaign hustlers have also approved this image makeover; as a recent Boston Globe headline put it, "Tough talk drives Clinton effort: National security stance seen adding to image of strength." One political scientist from Texas stated: "She's come off as credible and serious on national defense — an issue that two years ago most of us would have thought would be a liability for her." The Globe noted that "When Geraldine Ferraro was the Democratic candidate for vice president in 1984, she was dogged by questions about whether she could 'push the button' to launch an attack if the Cold War turned hot." The paper then quoted Ferraro as saying that Clinton, whom she supports for President, has passed that test: "You can't do that with Hillary Clinton. Hillary is in a totally different place."

Great, so forget the hope that a woman President might prove to be more enlightened than macho men in the matter of peacemaking, and instead rest assured that Hillary would have the cojones to "push the button" that would kill us all. Once again, the old Clintonian tactic of triangulation: positioning oneself politically instead of taking a position of integrity.
By Robert Scheer
Reprinted with permission from the The Nation