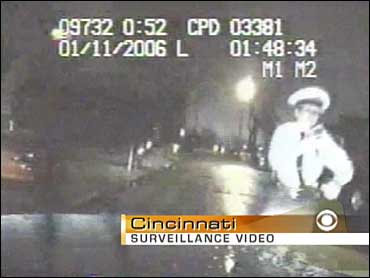 A Cincinnati police officer is expected to be OK after she was shot in the face during a traffic stop.

caught on tape
by a camera mounted in the dashboard of the police cruiser.

The bullet fired at Officer Christine Holtman during a traffic stop went through the visor of her hat, broke her glasses, and grazed her right cheek. It left a three-inch gash on her face. Stitches were needed to close it.

Holtman and her partner, Officer Lauren Smith, then fired at the suspect, identified later as Dante Person, 18, wounding him in the leg.

The .45 caliber gun that Person allegedly aimed at Holtman jammed, and he wasn't able to get off additional shots.

Police say he took off on foot but was caught soon after by SWAT teams in the basement of a nearby house.

Police said Person has a history of brandishing a gun and a juvenile record that includes eight convictions.

Person was a passenger in a car that the two officers pulled over because, they say, it had dark tinted windows and no license plate light.