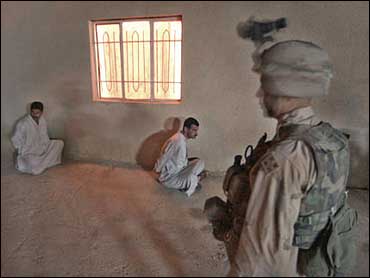 U.S. soldiers say they missed catching Saddam Hussein's new security chief and perhaps the ousted leader himself by just 24 hours, reports CBS News Reporter Lisa Barron. The soldiers from the 4th Infantry Division raided three farms near Saddam's hometown of Tikrit before dawn, acting on a tip the security chief was staying there.

South of Baghdad, one U.S. soldier attached to the Marines was killed and one was wounded in a grenade attack. The death was the first of the week after one of the bloodiest seven-day periods in the guerrilla war against American forces since President Bush declared major combat in Iraq was over on May 1.

The military said it had no further information on the attack, which occurred at 2:35 a.m.

The death brought to 48 the number of U.S. forces killed in combat in Iraq since May 1 So far 163 U.S. soldiers have died in the war, 16 more than the number of those killed in the 1991 Gulf War.

There had been hope the killings Tuesday of Odai and Qusai Hussein, two of Saddam Hussein's sons and Nos. 2 and 3 on the U.S. most-wanted list, in the northern city of Mosul might demoralize the resistance. Instead, their deaths appear to have inspired a wave of revenge attacks.

Four U.S. soldiers were killed Saturday, three in a grenade attack outside a children's hospital in Baqouba, 45 miles northeast of Baghdad, and one in a bomb and rocket-propelled grenade attack just west of the capital near the notorious Abu Ghraib prison.

In Tikrit on Thursday, U.S. troops of the 4th Infantry Division captured a group of men believed to include five to 10 of Saddam's bodyguards in a raid in the city. After that soldiers learned that Saddam's new security chief and possibly the dictator himself were staying on one of the farms, Russell said.

"The noose is tightening around these guys," said Col. James C. Hickey, a brigade commander. "They're running out of places to hide, and it's becoming difficult for them to move because we're everywhere. Any day now we're going to knock on their door, or kick in their door, and they know it."

The army would not name the man they had targeted, but said he was believed to have taken over Saddam's security after the arrest of Abid Hamid Mahmud al-Tikriti, Saddam's cousin and presidential secretary on June 17.

Mahmud, who was number four on the U.S. most wanted Iraqis list, controlled all access to Saddam. He and Saddam's younger son Qusai were believed to be the only two people trusted with knowledge about Saddam's whereabouts.

Troops found Saddam's sons with the help of a tipster, and, as CBS News reports, they say it's just a matter of time before someone rats out the former dictator.

Hundreds of soldiers, backed by Bradley fighting vehicles, surrounded the farms as Apache attack helicopters hovered above. No shots were fired. About 25 men were in the houses and emerged peacefully. They were briefly detained and released later Sunday.