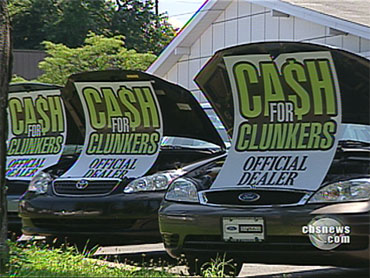 Cars and light trucks sold in July got more miles per gallon than those sold in previous months, say researchers, who credit the Cash for Clunkers program.

The average mileage for new vehicles rose from 21.4 miles per gallon in June to 22.1 mpg in July. That may not sound like much, but it's the highest mileage researchers at the University of Michigan have seen since the Environmental Protection Agency reconfigured mileage estimates in October 2007. It's also the biggest one-month jump.

Study co-author Michael Sivak noted the improvement came even as gas prices fell and unemployment levels shrank somewhat. Normally, those factors lead to the purchase of more gas guzzlers. The higher mileage shows the effect of Cash for Clunkers, Sivak said, and he expects the jump to be even bigger when August figures come out. That's because the trade-in rebate program only got going late in July.

The clunkers program gives people trading in certain vehicles up to $4,500 if they increase their mileage by at least 5 to 10 mpg.

A lasting trend showing a large increase in mileage for new cars sold would be unusual for this country.

"We have made very little improvement over 84 years. Therefore, the changes we are seeing now are huge," Sivak said.

Those are only figures for new cars sold. Most cars on the road are older and it takes about 20 years for the fleet on the road to turn over completely. The new figures are a first step toward less pollution and less gasoline used, Sivak said.